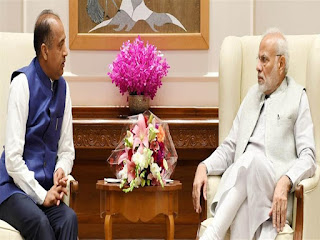 SHIMLA--- Chief Minister Jai Ram Thakur called on Prime Minister Narendra Modi at New Delhi on Thursday and apprised him in detail about the losses incurred in the state during monsoon season. He requested to depute an inter- ministerial team to assess the losses besides providing an interim relief till the report of the team is received to compensate for rain damages.

He also urged for construction of defence airport of international standard in Himachal Pradesh keeping in view its strategic location.

The Chief Minister informed the Prime Minister that airport authority after conducting a survey of 3479 bigha land at Naagchala in Mandi district found the site fit for construction of an international airport and landing large aircrafts. He urged for construction of the airport in Mandi district for defence purposes and added that as Indian Air Force was looking for a safe air strip in adjoining areas after terrorist attacks on Pathankot airbase, Mandi airport could prove a good alternative as air strips at Shimla, Kangra and Kullu were not meant for bigger aircrafts. He said that the site had connectivity with entire state of HP and therefore could prove crucial to combat any threat. He said that the airport would be useful for defence purpose as well as civil use also which would facilitate tourists thereby boosting tourism in the state.

Narendra Modi assured the Chief Minister of prompt action on demands raised by him.

Additional Chief Secretary and Principal Secretary to the Chief Minister Dr. Shrikant Baldi was also present in the meeting.