It's high time to adopt natural farming to save human and soil health: CM 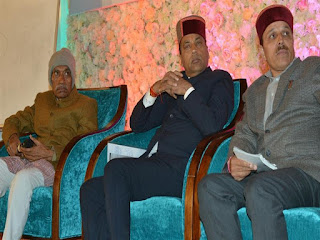 SHIMLA----Five-day zero budget organic natural farming workshop for farmers of the State is being organised at Kufri near Shimla by the State Agriculture department under the guidance of Padam Sri Subash Palekar, who provided important information regarding natural farming to the farmers.

While presiding over the third day of the workshop, Chief Minister Jai Ram Thakur  today said that in an effort to increase horticulture and agriculture income, the farmers of the country as well as the State over the years have excessively used chemical fertilisers, which not only degraded the soil, but also adversely affected the health of the human beings. He said that no doubt initially they managed to increase their income but after saturation stage the production decreased drastically. Main cause of this was degradation of soil due to over use of chemical fertilisers, he added.

He said that farmers should rear cows of local breeds it would be beneficial for both human health as well as health of the soil. With the support and cooperation of the farmers, Himachal Pradesh would soon become a natural farming state of the country. The state government would also provide all possible assistance to the farmers of the state to make it a 'Zero Budget Natural Farming State' of the country.

Agriculture Minister Dr. Ram Lal Markanda said that Himachal was well suited for natural farming as this would not only help in maintains health of the human being but also maintain the health of the soil. He said that it was on the initiative of the Chief Minister that the state government sent its Deputy Commissioners on study visit to natural farm of Governor Acharya Devvrat at Kurukshetra in Haryana.

While addressing the farmers, Subash Palekar said that it was unfortunate that in an endeavour to increase the production, the farmers and fruit growers were excessively using pesticides causing ill-effect on the health of the people. It was vital for the well being of the society that we adopt natural farming in a big way. He said that it the agricultural and horticultural produces grown with excessive use of chemical fertilisers were causing serious effect on human health.

Dr. Rajinder Singh Jhobta, a surgeon by profession and Subash, a horticulturalist shared their experiences with the natural farming in their apple orchards.