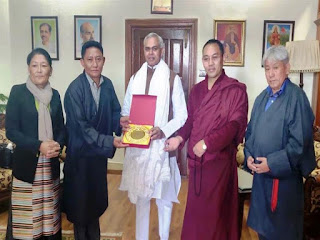 SHIMLA----A delegation of the Tibetan Parliament-in-Exile today called on Governor Acharya Devvrat at Raj Bhavan and expressed their gratitude to the Government and the people of India for being an amiable host to the Tibetan refugees till now. The delegation included the Members of the exiled Tibetan Parliament, Shri Dawa Tsering, Ven. Jampal Tenzin, Shri Tashi Dhondup and Mrs. Samten Choedon.

On this occasion, the Governor said that there has been a history of co-existence and cultural exchanges between Tibet and India from Centuries.   We were neighboring countries and have rich ancient and contemporary civilizational relations, he added. He expressed happiness that during the 60 years of exile, the residence of the religious leader Dalai Lama and the center of Central Tibetan Administration has been set up in Himachal.

The delegation also presented their five-point request letter to the Governor on this occasion. They also apprised the Governor about the deepening crisis inside Tibet and to seek serious consideration over the deteriorating situation their. They said that Tibet has received considerable global support in their freedom movement, but seek to garner more political support and solidarity from Indian Parliamentarians and state legislatures for the reason that India has been particularly close with the Tibet Struggle.  They urged that Tibet issue should also be included in the meeting between the Government of India and China for discussion.