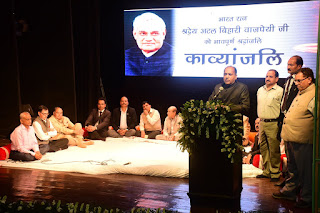 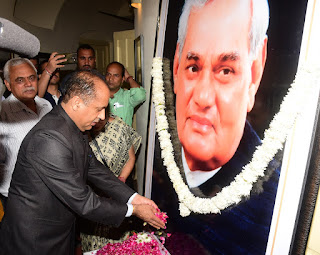 SHIMLA----A poetry session (Kavyanjali) was organised at Gaiety Theatre jointly by the Language and Culture department and Shimla district administration to pay tribute to former Prime Minister Atal Bihari Vajpayee. A short documentary based on Shri Vajpayee's life and audio recordings of his poems were also played during this event.

Speaking on the occasion, Chief Minister Jai Ram Thakur said that though Bharat Ratna Atal Bihari Vajpayee has left for heavenly abode, still he was alive in everybody's heart as a poet, a litterateur, a statesman, a open hearted person and for few people like a guardian.  He had a rare and a charismatic personality that no one can match and that was the only reason that though he was not in active politics for about twelve years, but entire nation came out to pay him tributes on his death.

He said Shri Vajpayee was a visionary leader and his contributions to the nation would never be forgotten. It was a matter of pride and honour for the people of the State that he always considered Himachal Pradesh as his second home. He used to come here regularly and wrote most of his poems during his stay at Preeni. He said that the people of the State would always miss his benevolence and special attachment with the State.

The Chief Minister thanked the poets for reciting heart touching poems on the life and personality of Shri Vajpayee.

Education Minister Suresh Bhardwaj also paid tributes to the former Prime Minister and said that he made great contribution for empowerment of the nation. He not only improved the economy of India but also introduced social reforms to uplift the unprivileged section of the society.

He said Shri Vajpayee fought against corruption with Jai Prakash Narayan and was also sentenced during emergency period. He said the entire world acknowledges Atal Ji and he would be always remembered as a man of principles. He was a source of inspiration and encouragement to everybody and we should follow his teachings in various fields.