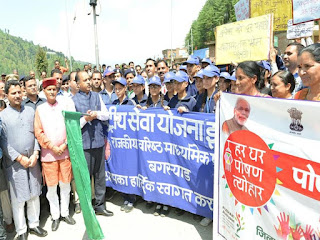 SHIMLA-------------Chief Minister Jai Ram Thakur said that the State Government was committed to provide best prenatal and post natal health care facilities to the mothers, besides best nutrition in order to ensure good health of mother and child. He was addressing the Aanganwari workers, representatives of Mahila Mandals and Panchayats on the occasion of Poshahar week at Bagsiad in Seraj area of Mandi district today.

The Chief Minister administered the oath to the Aanganwadi workers, Mahila Mandals and Panchayat representatives regarding nutrition campaign under the Poshan Abhiyan, one of the most ambitious programme of the Government for ensuring best nutrition for better health of mother and child.

Jai Ram Thakur said that the Poshan Abhiyan was a major initiative of Prime Minister Narendra Modi, as he was committed to make a healthy nation. He said that the State Government was also ensuring best health care and nutrition facilities to the mother, child and adolescents. He urged the people for their active cooperation in making the campaign a big success.

Earlier, the Chief Minister honoured artisan Ghimbar Ram for manufacturing traditional musical instruments and Inder Singh of Wood Craft Training Centre, Seraj for wood craft under the Guru-Shishya Parampara Scheme of State Art Language and Culture Department. In addition, five Shishya (student) were also honoured in both the avocations by the Chief Minister. The teachers would get an honorarium of Rs 3000 per month for a year and students would be given an honorarium of Rs 1000 per month.

Earlier, the Chief Minister laid foundation stone of lift irrigation scheme Thach Sawala in Gram Panchayat Tandi to be constructed at a cost of Rs 69.13 lakh. He inaugurated the newly created HP PWD Division at Bagsaid.

He also laid foundation stone of flood protection work for Thunag bazar to be in completed at a cost of Rs. 657.15 lakh. He inaugurated newly created Fire Post at Thunag.