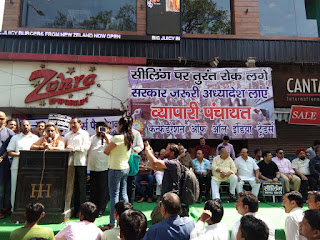 CAIT TO HOLD MEGA RALLY ON 28 MARCH AT RAMLILA GROUND

NEW DELHI-------The commercial activities in Country's capital remained standstill today with a day long Delhi Trade Bandh call given by the Confederation of All India Traders (CAIT) against arbitrary sealing of business establishments in Delhi. More than 7 lakh commercial establishments and more than 2500 markets across Delhi participated in Delhi Trade Bandh. At the Vyapari Panchayat held today at Karol Bagh, the CAIT declared to hold a Mega Rally of Delhi Traders against sealing on forthcoming 28 March at Ramlila Ground.

The traders are deeply agitated because of conducting sealing in utter violation of statutory provisions of The Municipal Corporation of Delhi Act,1957.Protesting traders took out protest march in different markets of Delhi and held demonstration at about 100 different places across Delhi demanding immediate stoppage of sealing and de-sealing of properties already sealed.

It is estimated that during the day long Bandh there will be a business loss worth Rs. 1800 crore thereby causing a loss of revenue to the tune of about Rs.150 crore to the Government. Beside  working hours of more than 20 lakh people engaged in Delhi trade have gone waste.

Terming the all party meeting called by Delhi CM today as a political stunt, the CAIT said that why the meeting is necessary since Delhi Government is competent enough to take steps to stop sealing on its own and does not need support of any other political party. It is better if Mr. Kejriwal do whatever in his domain instead of politicising the issue.

Mr. Praveen Khandelwal, Secretary General of CAIT said that Delhi has multiple Authorities having no coordination and thereby resulting into unplanned development of Delhi so far. It has also led to miserable failure of all three Master Plans since 1962. The Government has failed to develop sufficient commercial space in proportion to population growth and this deficiency was covered by traders by opening shops. It is noteworthy to mention that in an Affidavit filed in Supreme Court in 2008, Secretary, Ministry of Urban Development had admitted that the Govt could develop only 16% of commercial space in Delhi in 40 years. It is pity that instead of appreciating the traders, their shops are being sealed.

At the Vyapari Panchayat held at Karol Bagh thousands of traders passed a resolution demanding demanding the Delhi Chief Minister Shri Arvind Kejriwal to pass a Bill to stop sealing on first day of Assembly session beginning 16th March and forward the same to central Government for approval.On the other hand, the Central Government should bring a Bill for Moratorium on sealing in current session of the Parliament.

In an another resolution passed at the Panchayat it s said that since next Master Plan 2021-2041 is under preparation, it would be better that instead of penalising the past violations, the focus should be to make the next Master Plan a well drafted document for planned development of Delhi and as such the Government should bring an Amnesty Scheme to maintain status quo as on 31.12.2017 and no penal action should be taken against any trader but offences may be compounded by introducing a compounding policy and in future the law and its implementation should be made more strict and offenders be given exemplary punishment. They have further demanded that Delhi Government should immediately notify 351 Roads as commercial or mix land use pending  with it since last many years.