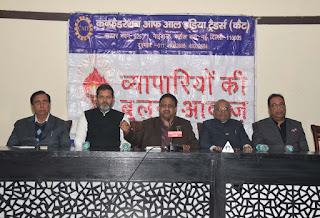 SHIMLA-----After a successful Delhi Trade Bandh on 23 January protesting against sealing, the Delhi traders are up in arms and has decided to observe 48 Hours Delhi Trade Bandh on 2nd & 3rd February,2018 protesting against sealing and demand the Union Government to bring earliest a Bill in forthcoming session of the Parliament to protect trade and traders of Delhi. Trade Leaders from all over Country will be joining Delhi traders at Delhi on 3rd February to demonstrate their solidarity with Delhi Traders. All wholesale and retail markets of Delhi will be closed during the Trade Bandh.

The Delhi Trade Bandh call is given by the Confederation of All India Traders (CAIT) at a meeting of the trade leaders of Delhi held today at Constitution Club, New Delhi which was attended by representatives of about 500 prominent trade associations from all parts of Delhi.

CAIT Secretary General Mr. Praveen Khandelwal said that during their 48 Hours Trade Bandh, the traders will hold protest march and Dharna in their respective markets. Prior to this the trade delegations will meet all seven MPs and MLAs of Delhi and will submit their Memorandum. Beside, the traders will also give memorandums to prominent leaders of all political parties.

The manner in which sealing is being held without giving any notice or opportunity of hearing and in a dictatorial manner without assigning any reason and keeping aside the basic fundamental provisions of Delhi Municipal Corporation Act,1957 . The Monitoring Committee is working like an extra Administrative Authority in Delhi which is detrimental to democratic fabric of the Country. The traders are being harassed and victimised. MCD is working like a puppet which is irking the traders.