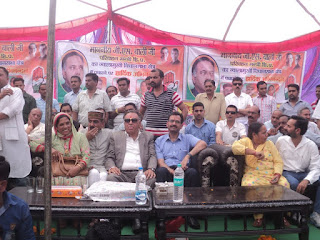 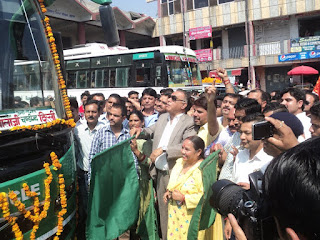 JAWALAMUKHI------Transport Minister GS Bali on Sunday flagged off Jawalamukhi --Delhi Volvo bus service of the HRTC at Jwalamukhi  and declared that the 20 new Volvo buses would be plied to connect all the famous places of worship in the state.  Orders have already been placed for purchase of 50 new AC buses which would be operated within and outside the state with just 15 per cent extra fare, he added.

While addressing the gathering at Bus Stand ,Bali said the HRTC  also going  to start Shimla – Katra Volvo bus service very soon.Volvo service would not only facilitate the pilgrims visiting the Mata Vaishno temple but would also beneficial from tourism point of view.

with a view to provide safe, reliable and comfortable transport services to the people 1231 new buses had been added to the fleet of the HRTC. Besides, 300 more buses would be purchased out of which 200 would be plied on rural routes of the State and government was soon going to introduce pollution free electronic transport system for which the government of India has granted approval, he added. He said that the Civil Supplies Corporation with the support of HRTC would soon launch "Rajiv Thali Yojna"  at the bus stands of the State under which food would be provided at the rate of Rs. 25.

He said the first Indian Oil Depot had been approved for the State which would be made functional soon from Rampur near Una.  Bali said 24 new ITI's and two Engineering Colleges were opened by the present State government and IIT had been opened in Una district.