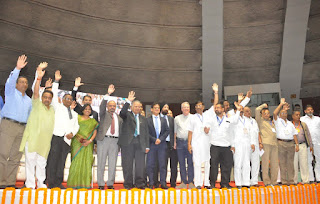 SHIMLA----The three day national traders conclave of the Confederation of All India Traders (CAIT) began today at Talkatora Stadium at New Delhi and while holding a marathon debate on contentious issue of allowing FDI in e commerce, the conclave unanimously decided to launch an aggressive nationwide agitation against allowing FDI in e commerce since it will create an uneven level playing field and the businesses of the brick and mortar shops will be transferred to e commerce. The conclave also noted that the policy of the Government is suffered from various loopholes which will be advantageous for the e commerce companies and they will manage to flout the policy in a easy way. About 10 thousand trade leaders from all over the Country are participating in the Conclave which is chaired by Mr. B. C. Bhartia, National President of CAIT. Senior officials from Mastercard, HDFC Bank, Amway, eBay and Cibil also attended the conclave.CAIT National Secretary General Mr. Praveen Khandelwal said that FDI in e commerce or in retail trade will prove to be much detrimental to the trading community. He clarified that the traders are not against e commerce but any kind of FDI in e commerce is not acceptable to the traders. It is noteworthy that FDI is available either through private equity or venture capital which does not carry any interest whereas if it is plain funding even then in western countries, the funds are made available at a interest rate of 0.75% to 3% whereas in our Country the minimum interest rate is 12%.  Because of this wide gap in interest rate itself, the trading community will not be able to compete. Though the Govt is saying that deep discounting is not possible but we have seen in the past that how the e commerce companies indulged into Business to Consumer dealings for which they were not entitled under FDI norms. We made loud shout but no action was taken against any Company. So, what is the mechanism under the policy which is enforcing Authority -asked Mr. Khandelwal.Delegates at the Conclave lamented that traders in the Country are being utilsed as "use and throw" commodity and no weightage is given to traders in policy making. Though Prime Minister is emphasising on need of strengthning small businesses but sadly the actions and policies are much against the vision of the Prime Minister. The Government must recongnise the role of trading community in economy and nation building.The Conclave demanded the Government to roll back FDI in e commerce and empower domestic trade to embrace e commerce technology for which the traders will certainly support the Government.