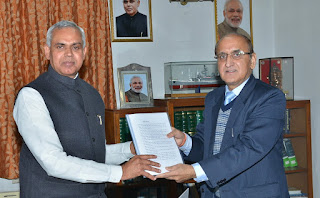 SHIMLA---Chairman HP Public Service Commission, Shri K.S. Tomar called on the Governor, Acharya Devvrat at Rajbhawan here today. He presented a document of new reforms and initiatives taken by the Commission to the Governor.

The Governor appreciated the efforts of the Commission for bringing in important reforms and initiatives especially the step of providing optional languages   ( Hindi & English ) for interviews, adoption of new pattern of State Administrative Services Examination on the analogy of Union Public Service Commission and re-designing of syllabi for various papers of this examination, introducing Toll Free Helpline and Bar Coded optical mark reader system for evaluation of answer Sheets etc. He hoped that it would go a long way in strengthening the Commission besides facilitating the candidates preparing for various exams of the Commission.

The Governor also assured full support for the initiatives of the Commission and hoped that such reforms particularly providing optional languages for interview would help the aspirants especially from rural areas.

Apprising the Governor, Shri Tomar said that the Commission had decided to switch over from HAS pattern of written examination to IAS pattern which would be a revolutionary step and added that it would not only simplify the process but also save the efforts of aspirants. He said that it aimed at providing equal playfield to candidates from various backgrounds and added that one optional subject of 300 marks was abolished which had been done in civil services and now there would be one optional subject of 200 marks which would help all candidates. He said that aptitude test will be of qualifying nature in the preliminary exam and Himachal contents would be part of all three General Studies papers which would be useful to Himachali candidates, he added.

He said that new innovation of providing option to give interview in Hindi or English has tremendously helped rural candidates who face problem in communicating in English and added that as per the data, 80 to 90 percent candidates opted for Hindi as medium to give interview resulting in increase in number of intake of village background candidates in HAS, HPJS etc.

The Chairman further informed that HPPSC has introduced Bar Coded optical mark reader outer sheet for conventional exams like HAS, HJS, SAS, ACFs etc in order to enhance transparency as well as efficiency in the process.

He said that a toll free helpline has also been introduced for helping the candidates who face problem in filling online application forms as earlier the applications had the risk of getting rejected for small mistakes. He said that with this step, rejection of application forms has come down considerably and added that experts were available now from 10 am to 5 pm on working days to provide clarifications related to queries regarding filling online forms. He said that so far 56106 such calls were received on toll free helpline and another such number 0177 – 2629738 set up for helping the candidates.

Shri Tomar said that after being unanimously elected as the Chairman of Standing Committee of Chairpersons of State PSCs he would coordinate with other members to effectively take up pending issues at appropriate level. He said that he had also met Hon'ble President of India, Union Law Minister and Union Minister of State for Department of Personnel and Training regarding the issues.