No service is beyond humanity: Governor 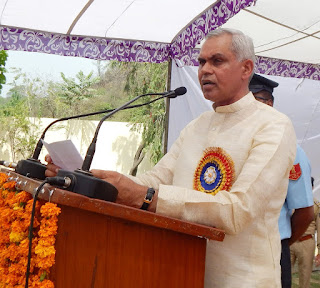 Shimla --- Governor Acharya Devvrat said that it was the era of science and innovative technology and using the latest techniques in education system would help to learn more in less time. He said that e-learning system could bring major changes in this direction and also help in better understanding.

He was speaking on the occasion of distribution of e-learning devices organized by Rotary Club, Shimla at historic Gaiety Theatre, here today.

The Governor said that the Rotary Club was doing important work of e-learning in education sector besides various social activities towards humanity. He said that the e-governing system which had been dedicated to selected schools through the Club certainly would be beneficial to the students in learning process as it was more useful in understanding and creates more interest in subjects. He added that the efforts of the Club for providing such facilities to the students would definitely be helpful especially to the needy students.

Acharya Devvrat said the Rotary Club has a long history of human services not only in the country but through-out the world. He said that the club had contributed in every sphere of society and doing commendable efforts towards the welfare of humanity. He said that the 'power of thought' was the biggest and with this thought members of the club were dedicating themselves towards the humanity.

He said that to understand the suffering and problems of others and resolving the issue would create an atmosphere of happiness and peace. He said that Rotary members were engaged in this mission of social work with selfless spirit. He added that the sense of service to humanity should remain in society.

The Governor hoped that the teachers share the great responsibility to inculcate values besides the knowledge of modern technology to the students so that they could become future of the Nation.

He congratulated the organizing committee for organizing the program and hoped that the club would continue their social activities in future also.

On this occasion, a cultural program was also presented by the school children.

President, Rotary Club, Shimla Shri Kapil Sood welcomed and honored the Governor on the occasion. He also briefed out various activities being executed by the Club. He said that all the members of the different wings of the Club had dedicated themselves towards the social work. He added that various health care camps, plantation drive, blood donation camps and other sensitization programme had been done by the club during last year. He said that a Sarai Bhawan was being constructed by the Club for the attendants of cancer patients near IGMC, Shimla.

Rotary Club, Zone 1 AG Shri Suraj Gupta, officials of various organizations, teachers and children from different schools and prominent people of the town were also present on the occasion.