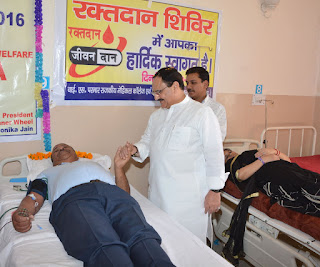 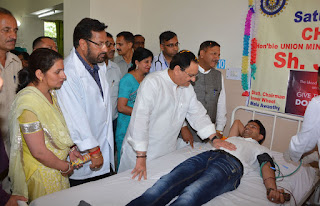 Shimla----Jagat  Parkash Nadda, Union Minister of Health and Family Welfare announced the upgradation of Nahan District Hospital to a Medical College, at Nahan in Himachal Pradesh today. The Health Minister stated that this will add 100 MMBS seats to the institute at an approved cost of Rs. 189 crores. The upgradation will also include a hospital teaching block, residential blocks and hostel blocks. Tertiary care facilities will thus get a boost with all these projects coming up," said Shri Nadda. Noting that the State of Himanchal has shown the progress at all fronts, the Health Minister stated that the upgradation project of both the Government Medical Colleges at Shimla and Tanda are being upgraded for their Super Specialty Services at a cost of Rs 150 crore each. This is being done in sharing with the States. Shri Nadda further informed that Himanchal has already been sanctioned one new AIIMS at Bilaspaur. Shri J P Nadda stated that the Government is focused on strengthening the primary healthcare system while at the same time providing adequate facilities to secondary and tertiary healthcare in order to reduce the out of pocket burden on our citizens. The Union Health Minister stated that the Government has already started the process to establish 10 new AIIMS in addition to 6 already established in the previous term. Once fully functional, more than 16,300 additional bed strength would be available in the 17 AIIMS (960 beds in each Institution), he informed. The Minister further added that in addition to this super specialty blocks are being set up in 70 medical colleges and 58 district hospitals are being upgraded to Medical Colleges. 20 Cancer Institutes and 50 Tertiary Cancer Care Centres are being set up. National Cancer Institute, Jhajjar (with bed capacity of 710) and 2nd campus of Chittaranjan National Cancer Institute, Kolkata are also being established