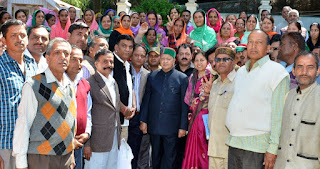 SHIMLA-----    Chief Minister Shri Virbhadra Singh disclosed here today that Ministry of Rural Development GoI had granted approval to 190 Detailed Project Reports of PMGSY roads and bridges of Himachal Pradesh worth Rs. 649. 48 crore.  This is the biggest single shelf of DPRs approved by GoI since the inception of PMGSY.

Shri Virbhadra Singh said that major highlight of this shelf of proposals was that new techniques would be adapted like cement stabilization in  30.71 kms of the roads and as a part of Green initiatived a length of 289kms of road would be constructed using cold mix technology.

While reviewing the status of the pending works, the Chief Minister directed the HP PWD to ensure finalization of contracts within 2 months and rework package size, so that maximum bidders participated. He said that packages could be clubbed or broken with a view to ensure completion and quality work. He said that the State quality monitors would ensure minimum of three inspections per work at various stages of progress.