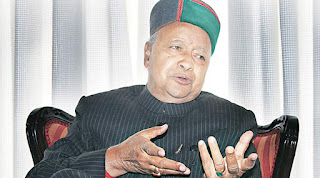 SHIMLA----Enforcement Directorate (ED) Wednesday issued orders for attachment of assets of Himachal Pradesh Chief Minister Virbhadra Singh worth about Rs 8 crore including a flat in a posh locality in connection with its money laundering probe case against him and others.

The agency issued a provisional attachment order, under the Prevention of Money Laundering Act (PMLA), seizing a clutch of LIC policies, bank fixed deposits and two storeys of a building in south Delhi's GK-I area.

Official sources said the assets have been considered the "proceeds of crime" of money laundering and were created by using alleged tainted funds.The agency, the sources said, has also issued prohibitory orders on these assets which are "valued at Rs 7.93 crore." An attachment order under PMLA is aimed at depriving the accused from obtaining benefits of their alleged ill-gotten wealth and the accused parties can appeal against the order before the Adjudicating Authority of the said Act Recently, the Delhi High Court had refused to grant any interim stay on money laundering proceedings initiated by the Directorate against the chief minister. Justice Pratibha Rani had issued a notice to the ED seeking its response before May 31 on Virbhadra's plea seeking stay on the proceedings and quashing of the money laundering case against him. ED has filed a case under criminal provisions of money laundering laws after taking cognisance of a complaint filed by CBI in this regard in September last year. It had also conducted searches in this in 2015 in three states of Delhi, Maharashtra and West Bengal. The agency is working to investigate the allegation that Singh and his family members allegedly amassed wealth of Rs 6.1 crore between 2009-11, disproportionate to his known sources of income, while serving as the Union Minister of Steel. The CBI FIR had named Virbhadra Singh, his wife Pratibha Singh, LIC agent Anand Chauhan and Chauhan's brother C L Chauhan and they were charged under the Prevention of Corruption Act. CBI suspects that during the 2009-11 period, Singh allegedly invested Rs 6.1 crore in life insurance policies in his and his family members' names through LIC agent Chauhan claiming this money to be his agricultural income. It alleged Singh attempted to legitimise the same as agricultural income by filing revised Income-Tax returns in 2012. "The agricultural income as claimed by him in his revised ITRs was not found to be tenable. The then Union minister had allegedly accumulated other assets disproportionate to known sources of income," CBI had alleged. CBI had also carried out searches at various premises belonging to Singh and family immediately after filing the FIR and the Congress party had then termed the action as "highly vindictive". ED has registered it's case in Delhi.