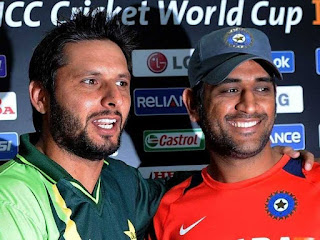 Not only Congress leaders but even BJP leaders including Shanta Kumar are against the idea of holding match with Pakistan.Opposition of match with Pakistan started after two soldiers from Himachal Pradesh were killed during the terror attack at Pathankot Air Base.

As Kangra is home to large number of soldiers and war memorial is located close to Dharamshala stadium, demand to cancel the match with Pakistan is gaining momentum in the state now.

Chief Minister Virbhadra Singh has already said that in the wake of two soldiers from state laying down their lives while fighting Pakistani terrorists, Dharamshala should not have hosted Pakistan for the match.

BJP MP from Kangra and senior party leader Shanta Kumar, who has also remained chief minister of Himachal Pradesh in past, has also objected to the match with Pakistan at Dharamshala.
Recently, he had said that considering Pakistani terrorists are killing Indian soldiers including those from state, match with Pakistan should not have been considered. He had also said that when bilateral talks, Secretary level, could be suspended with Pakistan then why not the match.

The ex-servicemen league of Himachal has declared an all-out war against the BCCI and Himachal Pradesh Cricket Association (HPCA) .President of league and vice-chairman of the Himachal Tourism Development Board Vijai Singh Mankotia said the match could only happen over the dead bodies of ex-servicemen of the area. He said that the ex-servicemen would not allow the Pakistan team of land in the area.

Former BJP MLA from Nurpur, Rakesh Pathania  said that holding match with Pakistan would be an insult to the state known as "Devbhoomi." He said that youth of state would oppose the match as match.

Himachal Lokhit Party (HLP) spokesperson Mahender Nath Sofat and general secretary Dharam Chand Guleria said that allowing match to be played at Dharamshala would be shameful and state government should not allow the match with Pakistan. "It would be an injustice to the families of martyred soldiers if Pakistan plays the match at Dharamshala," they added.HLP leaders while demanding to cancel the March 19 match also requested the government to seal the cricket stadium.

The chorus against the India Pakistan cricket match at Dharamsala was growing. President of the HPCA and BCCI secretary Anurag Thakur was, however, unruffled by the opposition to the match. In a press conference held recently at Dharamsala said that no politics should be played over sports. He also appealed to the families of the martyrs against joining the protest against the match.