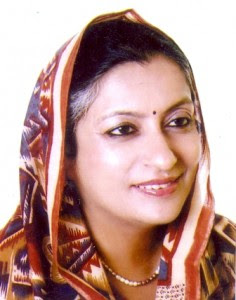 Kumari, a former education minister, was accused of manipulating revenue records, fabricating wills and transferring 60 bighas of government forest land in the name of her husband, Brijender Singh, in 1998.

On Friday, special judge Padam Singh of Chamba court also sentenced seven revenue officials, three of them have been given one year in prison each and other four to three years of imprisonment each.

Thirteen people had been accused in the case, but Kumari's husband and six others have since died.

The complaint had been filed nearly 18 years ago by Kuldeep Singh, a former municipal councillor. The state vigilance bureau had registered an FIR (first information report) on December 15, 2001, and on January 4, 2005, the accused were charged by a court in Chamba.

But Kumari later moved high court, which granted her relief, saying she had been "denied an opportunity of being properly heard".

However, the Supreme Court on December 2, 2011, confirmed the charges of "cheating, criminal conspiracy and forgery" and set aside the high court relief to Kumari.

The trial court had framed charges against her on August 14, 2012.