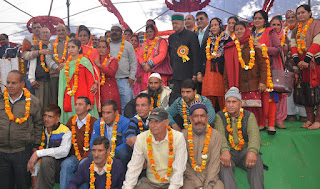 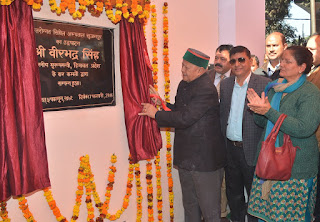 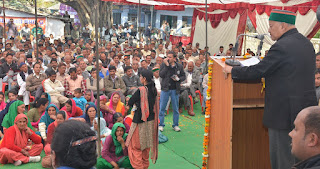 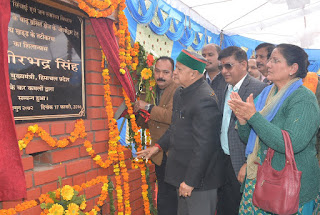 Hamirpur , 17 February ------ Chief Minister, Virbhadra Singh said that when we talk  about the ticket distribution during elections,  who so ever was  given ticket by the party, was  a party candidate and everyone should support and vote him. He cautioned those who try to create a rift in the party and asked them  to mend their attitude.  United and together we can make it, he said adding that the party cadre should support those wholeheartedly,  who is  a party candidate and those who try to work against the party cadre should be shameful of themselves and be ready for the action. He was addressing a huge public meeting at Sujanpur-Tihra  in Hamirpur today.

He said that in the recent panchayat elections the women of the State were given maximum representation and 70 percent of the results of Panchayat Samitis and local urban bodies were in the favour of the ruling Congress government. He congratulated the women folk and said that they should work for the betterment and welfare of the people who have voted them to power adding that development and empowerment of women leads to the development of the Nation as a whole.

The Chief Minister said that barring district, Kinnaur, Hamirpur and Kangra the post of Chairman/Chairperson of Zila Parishad had gone to Congress candidates. It shows that the people have faith in us and our policies, he said.

He said  that it has been observed that mind-set of politicians was shrinking for their own selfish motives. He said that every politicians should come forward for the welfare of the people and not to divide them on basis of caste and religion.  Today, we were witnessing lot of intolerance in the country on basis of caste and religion, which was an issue to be pondered upon. This was not in the interest of the country and politicians should refrain drawing dividing line between the people.

He said that in order to provide time-bound public services to the people of the State, 86 services of 15 departments had been brought under Public Service Guarantee Act.

He said that during the year 1948 there were hardly any roads in the state and as of now the State had 35,000 kilometres road length which was a great achievement. He said that during the year 1948 there were only six villages which had electricity and today there was 100 percent electrification. Similarly, there were around 94 colleges in the state out of which 25 were opened during the last three years in rural and far-flung areas benefitting the girl child the most to pursue higher education. Today the total number of educational institutions in the state had gone up to 15534.

He also inaugurated the 50 bedded civil hospital in Sujanpur and laid the foundation stone of channelisation of Sandh Rivulet in village Jol to cost Rs 90 lakh which would benefit the residents of village, Jol, Palahi and Samona. The Chief Minister also inaugurated the additional accommodation of PWD rest house at Sujanpur completed with an outlay of Rs 20 lakhs.

He said that he would have been a lecturer or a teacher if not in Politics, and it was a matter of chance I was selected by the party high command to represent the state.

The Chief Minister agreed in principle to fulfil all the demands as raised by Vice Chairman H.P. State Disaster Management Authority Shri Rajinder Rana and  said that after due consideration all the demands would be met. The demands raised  included  budgetary provision for construction of link road from Chamianian di khanouli road, construction of bridge over Pung Khud on Khya-Bhatera link road to be included in NABARD, construction of bridge over Pung Khud on Banal Chamiana link road, widening of link road from Ansla  to Khaneu-Kangri,  up- gradation of Police Station Sujanpur, and Residential accommodation for  SDM, Sujanpur, besides the Chief Minister assured  for examining the issue regarding exclusion of Darla, Tihra and Dera from Town and Country Planning Act.

Shri  Rajinder Rana thanked the Chief Minister for upgradation of Community Health Centre to Civil Hospital. He also listed the developmental activities which had taken place during the last three years including the SDM office at Sujanpur.

He said that the Congress would repeat under the Chief Ministership of Shri Virbhadra Singh as the Panchayat results were the glaring example of the faith of the people in the policies and programmes of the Congress government.

He said that soon a combined office building would come up in Sujanpur besides the construction of ITI building was on war footing. He said that an amount of Rs 2.47 crore had been sanctioned for the road to village Naglambar.

Former Chief Parliamentary Secretary, Smt. Anita Verma, also lambasted the previous BJP government for ignoring the interest and welfare of the people of the area and the constituency was bereft of basic facilities. She said that credit of all development activities goes to successive Congress Govt. under the Chief Ministership of Shri Virbhadra Singh.

D--Chief Minister Shri Virbhadra Singh with the people who joined the Congress party  at  Sujanpur on 17.2.2016.