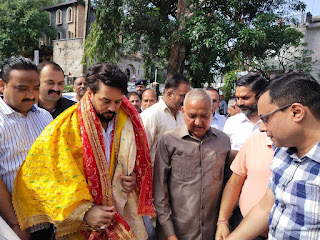 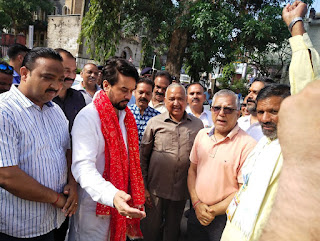 Vijyender Sharma
JAWALAMUKHI--------Deputy Chairman of State Planning Board and BJP MLA from Jawalamukhi , Ramesh Dhawala today supported the scheme "Agnipath" launched by the union Government for recruitment in the army.

He said that the opposition parties are trying to mislead the youth of the country on this decision. Dhawala said that keeping in mind the interests of the youth and to fulfill their zeal to serve in the army, this scheme has been integrated with the old system.
He said that this scheme will provide an opportunity to the youth to fulfill their dream of joining the Armed forces and serve the nation besides imbibing military discipline, motivation, skill and physical fitness. Smooth integration into society with skill screening assessment sets, certification and diplomas, higher education, credits will be ensured.He said that they would become confident and better citizens through military training, team building, ethos and camaraderie over the years.

He said that all candidates would be entitled for Seva Nidhi on completion of four years and skill gained certificate and credits for higher education will be imparted to them. Ramesh Dhawala said that the opposition involved in corruption is using youth to divert the attention of the public from the investigations being made against them, which is highly condemnable.

He appealed to the youth to understand the new scheme by getting the information being issued by the government and army. This scheme has been launched keeping in mind the better future of the youth and strengthening the Indian army, he added.