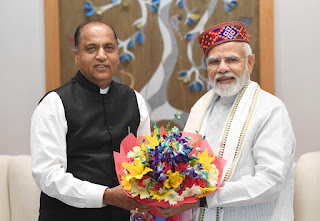 Chief Minister invited the Prime Minister to visit Himachal Pradesh. He urged for holding national level function on completion of centre government's eight years in office on 31st May in Himachal Pradesh. He said that Himachal Pradesh would be honoured to hold this national level function in which all districts of the country will join.  He also thanked the Prime Minister for his special affection for the state and its people and expressed gratitude for supporting the state government in every way for its speedy development.

Chief Minister also discussed about various ongoing projects in the state with the Prime Minister. He also apprised him about the sincere efforts of the state government towards making Himachal a Green State.

The Prime Minister appreciated the efforts of state Government towards achieving this objective. He assured of all possible support to the state.

Earlier, Chief Minister also spoke to Union Finance Minister Nirmala Sitharaman and requested her to visit Himachal Pradesh. He urged her to participate in a Conference with heads of all banks in the state to hold fruitful deliberations for increasing CD ratio in the state which is less at present and to explore possibilities to provide more loans to women and SHGs to empower women.