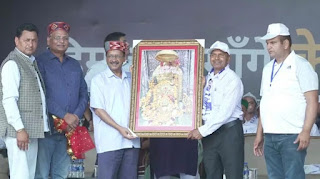 Beginning his party's campaigning ahead of this year's Himachal Pradesh election, Aam Aadmi Party (AAP) national convener and Delhi Chief Minister Arvind Kejriwal addressed a public rally here on Saturday. The AAP leader reached poll-bound Himachal Pradesh's Kangra district and addressed his first rally in the state. Addressing the rally, Kejriwal slammed the ruling BJP government and said that AAP was ready to implement 'Delhi model' of development in the state. AAP chief Arvind Kejriwal on Saturday addressed the people of Kangra, Himachal Pradesh, and said that the party was ready to open its account in the state. Making its poll appeal, Kejriwal listed the developments done by the party in Delhi. Slamming BJP and Congress, the AAP supremo asked the people of the state to side with his party and make a "new Himachal Pradesh". "It is time to make 'Naya Himachal Pradesh'," Kejriwal said addressing the public rally held in Kangra. Making the party's appeal, the Delhi CM informed that the party was open to accepting 'good people' from other parties in the state."I urge all the good people in BJP and Congress to leave their parties and join the Aam Aadmi Party. I request the people of this state to give AAP a chance," Kejriwal. The AAP leader went on to slam BJP and Congress' regimes in the state and said that the previous governments were corrupt beyond correction. "BJP and Congress-ruled Himachal Pradesh over the years but only looted it. Only BJP and Congress are responsible for the current situation of the state. They keep looting the state and they abuse me, what have I done?" Kejriwal said at the rally. He said that AAP is honest and is against the 'dirty politics' by other parties. Slamming the state government, Kejriwal said, "Now Jairam Thakur Ji has announced free electricity in Himachal Pradesh. But after that, he received phone calls from Modi Ji and Amit Shah asking not to talk about free electricity." Furthermore, the AAP National Convener asked the people to give his party a 'chance' in the state. Kejriwal further slammed the HP CM Jairam Thakur and said that his notion of the Delhi model is wrong. Speaking about the developments done in Delhi, Kejriwal said that his government stopped the malpractices run by private schools and made government schools thrive. "I invite the people of Himachal Pradesh and CM Jairam Thakur to visit Delhi to see the government schools there," he said. "Earlier no parents used to enrol their students in Delhi government schools. But now they are taking admissions. We have stopped the 'Goonda Gardi' of private schools. They used to increase the fees as much as they want, we stopped it when we came to power," the AAP supremo said. He further added that the national capital now has better health facility that is free. Kejriwal spoke about the anti-corruption system placed by the government in Delhi. "People of Delhi are going on free pilgrimages. I have provided 12 lakh jobs to youth in the last five years. I will provide 20 lakhs more jobs in Delhi," he added. The AAP chief also added that Punjab was free of corruption after AAP's takeover. The AAP chief went on to slam the ruling BJP and said that the saffron party was scared of his party. "BJP is scared of us in Himachal Pradesh and Gujarat. I have heard that they (BJP) will hold early Assembly elections in Himachal Pradesh and Gujarat because they are scared," he said. "Give us just one chance in Himachal Pradesh. And if I don't work, don't elect me again. I will also not come to ask for votes after 5 years," Kejriwal said, addressing the public rally. Notably, Kangra has the highest number of Assembly seats in the state - 15 out of 68. AAP is now expecting to put forth a fight in the upcoming elections.