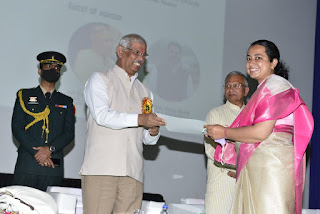 Dharmshala-----While presiding over the felicitation function organized at Dharamshala College jointly by the "Kangra Against Covid-19 Working Group" constituted under the Kangra district administration and the National Integrated Forum of Artists and Activists (NIFAA), Governor Rajendra Vishwanath Arlekar said that the organizations which make continuous efforts in the society were the real strength of the country.

The Governor said that everyone got inspiration from the Kangra Against Covid-19 Working Group. He said that there were many such organizations in the society which acted according to their ideology and thoughts and set an example for the society. Their experiences were recognized in the society and were a torch bearer for all of us.

Expressing concern over the drug addiction, he said that at present it was the biggest problem in the society. He said that there was a need to organize de-addiction programs against it to raise awareness among the people in the society, especially in Himachal Pradesh. All social organizations should come forward in this direction, he appealed.

"If the society thinks in one direction, then it has that power that it can face every challenge. It was the same strength of our thinking, we won the corona battle", said the Governor. He added that every person should cooperate for a drug-free Himachal as the figures or data of drug abuse in the State were shocking.

He also showed their concern in environmental issues and said that all of us should also work towards environmental protection. He said that if we didn't understand the environment properly, then problems might arise in future. He congratulated and expressed gratitude to all the officers and organizations that did excellent work during the Corona pandemic.

Earlier, the Governor honored the representatives of various organizations and administrative officers. 250 organizations were honored in this felicitation function.

On the occasion, National Convener, Paryawaran Vibhag, RSS Gopal Arya who was the special guest said that the power of society was massive. When the calamity of Corona came in front of the society, at that time the society did not let anyone starve to death. He said that we need to learn three things from the corona pandemic. Improve your lifestyle, redefine it as per your need and restart your life, he suggested. He stressed on the conservation of nature also.

Deputy Commissioner, Kangra Nipun Jindal put in words on the thinking behind the Kangra Against Covid-19 Working Group and the cooperation and contribution of the people during the Corona pandemic.

Vice Chairman, NIFAA Naresh Barana said that the organization was working in 28 States and 7 Union Territories of the countries. He said that they were doing social work in every field and had been registered in Guinness World Records seven times for social issues. He added that the Government of India had announced NIFAA as a top organization working in the social field.

President, NIFAA Sarika Katoch welcomed the Governor and detailed about the activities of the organization. She apprised about the contribution of other Organizations coordinated with them during covid-19 pandemic in the district.