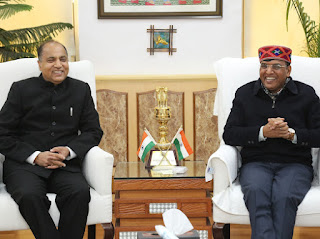 Union Health Ministry accedes to several demands of the State

SHIMLA-----The meeting of Chief Minister Jai Ram Thakur with the Union Health and Family Welfare Minister Mansukh Mandaviya yesterday at New Delhi has borne fruits as the Union Health Ministry has acceded to several demands of the State Government.

Disclosing this, a spokesman of the State Government said here today that the Ministry has agreed that the State could now take up brick and mortar constructions in place of pre fabricated structures for construction of Makeshift Hospitals if required to tackle the Corona pandemic. He said that this decision of the Central Government would enable the State to create permanent health infrastructure in the State.

The spokesman said that the Union Health Ministry has also allowed the State Government to procure additional 50 ambulances from the fund available under the ECRP-II. He said that this would not only provide better and reliable transport facilities to the patients but would also ensure prompt transportation of patients in any exigency. He said with this the response time would be less than 30 minutes.

The spokesman said that the resource envelope of Himachal Pradesh under ECRP-II  which was Rs. 203.86 crore has been enhanced to  Rs. 240.56 crore on the request of the Chief Minister.

The spokesman further said that the Union Health Ministry has also approved the proposals for rationalization of salary structure of staff under NHM and also engagement of additional Urban ASHAs under the supplementary PIP. He said that this would give big boost to strengthening health system in the State.