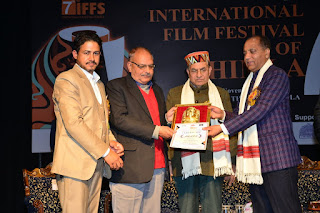 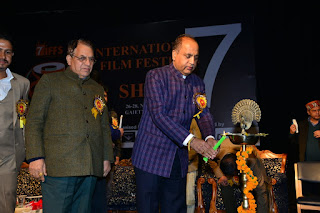 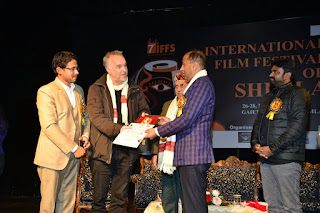 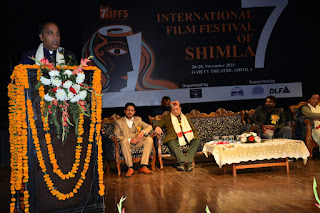 SHIMLA---                       Chief Minister Jai Ram Thakur while addressing the award ceremony of the International Film Festival Shimla said that the State Government was constantly emphasizing on the protection of language, art and culture and films were one of the best mode to conserve the same. He said that the State Government has also framed its own Film Policy to promote shooting of films in the State.  Chief Minister said that the State Government has signed a Rs.100 crore  MoU for setting up a film city in the State so that the film makers could get a conducive environment for shooting their films.  He said that with the setting up of a Film City, film makers of the country and the world would be able to shoot and produce the entire film in the State itself.   Jai Ram Thakur said that several filmmakers from India and abroad visit Himachal Pradesh to shoot there films due to it beautiful locations and beauty, films, but unfortunately Himachal Pradesh could not develop its film industry.  He expressed hope that such Film Festivals would definitely motivate the film makers of the State to excel in the film making. Chief Minister said that events like Shimla Film Festival were playing an important role in creating a positive atmosphere in the state regarding film production and the State Government was also giving full cooperation to organize such events.  He expressed happiness that during this film festival films were  also screened for the prisoners of Model Central Jail Kanda.   Jai Ram Thakur congratulated all the participants of the film festival, its organizer Himalayan Velocity and the Department of Language, Art and Culture, directors, producers and artists for making the seventh edition of International Film Festival Shimla such a success.  Chief Minister also gave away awards to the best films, short films and documentary on the occasion.  Urban Development Minister Suresh Bhardwaj said that Shimla town has been first choice of the film makers from the start of Indian Cinema. He said that the India Cinema was one of the best mode for strengthening the rich cultural diversity of the country.   Director LAC Dr. Pankaj Lalit also spoke on the occasion said that films from 16 countries were screened during this three day festival.  Noted Producer and Director Vijay said that Himachal Pradesh has always been the favourite destination for film makers. He said that covid pandemic adversely affected the film industry, but fortunately now the cinema has opened and Indian Cinema was once again buzzing with activities.     Festival Director of 7th international Film Festival of Shimla Pushp Raj Thakur while welcoming the Chief Minister said that as many as 58 International, National and State level films were screened in this three days festival out of which six films were from Himachal Pradesh.  Mayor Municipal Corporation Shimla Satya Kaundal and Secretary LAC Academy Dr. Karam Singh were present on the occasion among others. -0-