Rath Yatra in all 68 constituencies : Kashyap 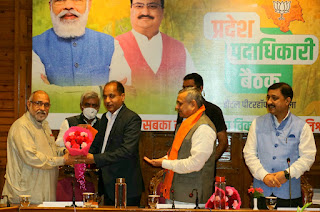 Rath Yatra in all 68 constituencies : Kashyap

Vijyender Sharma
Shimla, BJP State Office Bearer Meeting was held in Petrehoff shimla . The meeting waa presided by State President Suresh Kashyap.
Nation Vice President Saudan Singh, State BJP incharge Avinash Rai Khanna , Chief Minister Jairam Thakur and State Co Incharge Sanjay Tandon were also present in the meeting.
Addressing the Meeting Suresh Kashyap Said that Himachal has completed 50 years of Statehood and BJP will play a frontal role in the implementation of Golden Jubilee Rath Yatra to be taken out in all 68 Constituencies in Himachal.
BJP will take all the achievements of the centre and the state government door to door. We will start a massive sampark abhiyan.
He said BJP in this meeting have decided the programmes to be held in coming times. We will be be organising Panna Committee sammelan , panch Parmeshwar sammelan in times to come that will strength the organisation.
He said BJP has done well in organising all programme till date, we got a great response during the Ashirwad Yatra and the tour of Centre Minister Piyush Goel was also a total success.
The Pradan Mantri Greeb Kalyan Ann yojana has got a good response on ground.
He said BJP has done well in seva hi sangathan part 1 ans part 2 , wokers have served the people time to time.
We have also stood out in the vaccination drive under the able leadership of Chief Minister Jairam Thakur , during the first dose himachal has got the 1st position in India and till November end we will completing the second vaccination for all citizens of our state.

Chief Spokesperson Randhir Sharma Said that BJP is all set for upcoming By Elections, as soon as the elections are announced BJP is ready for the same.
He said BJP will be celebrating 2 October by organising various programmes under cleanliness drive, we will also be cleaning water bodies all over the state.