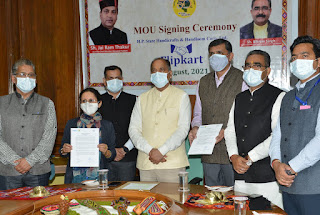 SHIMLA---- A MoU was signed between the State Handicrafts and Handloom Corporation and Flipkart for online sale and promotion of the products of the Corporation in presence of Chief Minister Jai Ram Thakur here today.

Speaking on the occasion, Chief Minister said that the Covid-19 pandemic has adversely affected the economy of the rural artisans and local manufacturers. He said the MoU would provide an e-Commerce platform for over 20,000 artisans associated with handloom and handicrafts in the State. He said that now the artisans would get an opportunity to market their products online and get remunerative prices of their artifacts. He said that this would also ensure the reach of Himachali handicraft and handloom products not only in national but international market as well.

Jai Ram Thakur said that the MoU would also help in promoting the Brand Himachal at international level and people throughout the world would have access to the State of the art products manufactured by the Himachali artisans. He said that this would go a long way in strengthening the economy of the local artisans, besides providing world famous handicraft and handloom products of Himachal Pradesh to the people with a click of a button from anywhere in the world.

Chief Minister appreciated the efforts of the State Handloom and Handicraft Corporation for preparing this business model and providing the artisans e-market platform. He also congratulated the Handloom owners of the State on the occasion of 7th Handloom Day being celebrated on 7th of August, 2021.

Industries Minister Bikram Singh Thakur welcomed the Chief Minister and thanked him for envisaging keen interest in strengthening the Corporation.