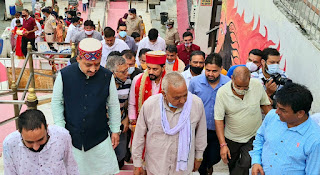 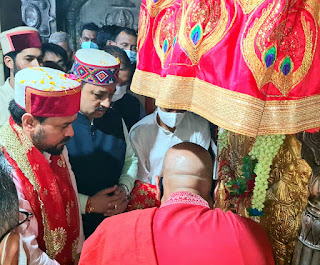 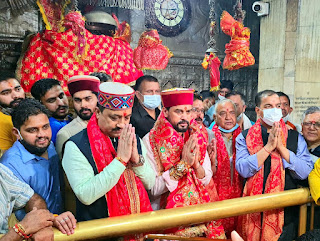 Vijyender Sharma
JAWALAMUKHI----Information and Broadcasting Minister Anurag Thakur on Sunday Visited famous shrine of Jwalamukhi  in Kangra District of Himachal Pradesh during his  Jan Ashirwad Yatra of the State to pay obeisances. Mr.Thakur along with Himachal BJP President M P , Suresh Kashyap reached the shrine this afternoon.
The temple is dedicated to Jwalamukhi- the Goddess of Light, also known as the Flaming Goddess or 'She of the Flaming Mouth..The temple consists of a copper pipe which emanates natural gas which is lit by the temple's priest to form a flawless blue flame. The flame is worshiped as the manifestation of the goddess Jwalamukhi. Some also believe that Jwalamukhi represents the flaming mouth of Jalandhara, the demon who was crushed to death by Lord Shiva. The flames are believed to come from his mouth. Nine flames have been named after the goddesses – Mahakali, Annapurna, Chandi, Hinglaj, Vidhya, Basni, Maha Lakshmi, Saraswati, Ambika and Anji Devi which burn continuously.
He was accorded a warm and rousing reception by a large number of BJP workers and local baridars of temple who welcomed him at the gate of Jawalamukhi shrine , with traditional musical instruments as he entered the temple.He prayed for the well being and prosperity of the people of the State.
Senior BJP Leader Jyoti Shankar Sharma, said the Union Minister had pooja of the deity for better health, peace and prosperity.Local MLA and Vice Chairperson of State Planning Board Ramesh Dhawala presented a photograph of Jawala ji to the Union Minister . Senior officers of the district administration and other distinguished people were present on the occasion.