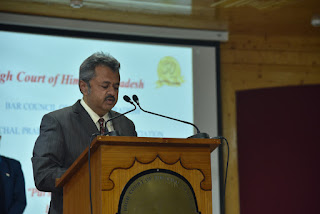 In his inaugural address, the Acting Chief Justice Ravi Malimath said that the lecture series "Pursuit of Excellence"  is to ensure  the holistic development of lawyers. He said that in this series  all facets of life as well as the intricacies of the Court procedure will be discussed, which will not only enhance the legal skills but also contribute in the overall development of lawyers.   He said that  lawyers should not  only be  lawcentric but humancentric.

The inaugural address, by the Acting Chief Justice was  on "Ethics and Morality".  He said that at times moral and ethical approach may not seem to be  lucrative choice, it may not be choice of the masses, but it will always be the right choice, which will hold the lawyer in good stead in the long run. He emphasized on following the moral and ethical approach and said that the justice is delivered in real terms only when  morality and ethics are followed.

The lecture series has been envisaged by  Acting Chief Justice Ravi Malimath to hone the legal as well as soft skills of  lawyers.  The lecture on any one subject once a week shall be delivered by the people of  all walks of life, having vast experience in their field,  to enhance the skills of lawyers.   The lectures will be followed by   interaction which will benefit the entire legal community.

In the inaugural function, the welcome address was given by Sh.Nareshwar Singh Chandel, President, H.P. High Court Bar Association and the Vote of thanks was proposed  by Sh.Ajay Kochhar,  Chairman, Bar Council of Himachal Pradesh.

Shri Balram Sharma,  Assistant Solicitor General of India, Registrar General Sh. Virender Singh, other Registrars of the H.P. High Court, Senior Advocates, and Members of  the H.P. High Court Bar  Association were also present on this occasion. The  Members of the other  Bar Associations in the State of H.P., attended the   inaugural function through  virtual platform.