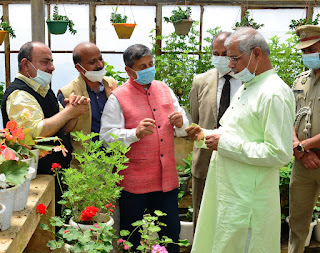 On this occasion, the Governor said that this station was an important institution of Dr. Y.S. Parmar University of Horticulture and Forestry Nauni, where research work was being done on various varieties of apples, which was praiseworthy. He advised the scientists to work on the development of high yield apple varieties in this institute. He said the Center was playing an important role in research and transfer of technology on temperate horticulture.

"I am happy that the fruit growers are getting the benefit of research on different varieties here especially for apple growing areas. I want that the research on apple plants of high density, high yield and disease resistance should be carried forward so that the apple economy of the State can get a new dimension", said Shri Arlekar.

While expressing contentment over the largest germplasm centre for apple having 276 varieties, pear having 79 varieties and cherry having 46 varieties, he said that focus should be given for transfer of technologies from lab to land in relation to horticulture through trainers' trainings, farmers' trainings, field visits, field demonstrations etc.

Shri Arlekar also visited the display apple orchard set up in the station and praised the authorities for the good apple crop in this orchard. He also inspected the laboratories and appreciated the officers and staff of the institute for the proper maintenance of the institute. He also visited the apple orchards set up under Subhash Palekar Natural Farming. Various varieties of flowers produced in the station were also shown to the Governor. He appreciated the initiatives and research work being carried out in the center.

The Governor also planted saplings of Himalayan hypericum on the premises of the Station.

Earlier, the Vice Chancellor Dr. Parvinder Kaushal welcomed the Governor and briefed about academic, research and extension activities of Horticulture University through power point presentation. He said that this station has played a pivotal role in emerging the name of Himachal as 'Apple State of India' and added that the fruit growers were relying on the recommendations and other advisory services of this station in their day to day orchard operations.

Dr. Ravinder Sharma, Director Research, scientists and other research fellows were also present on the occasion.
-0-