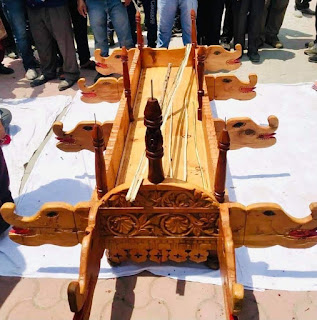 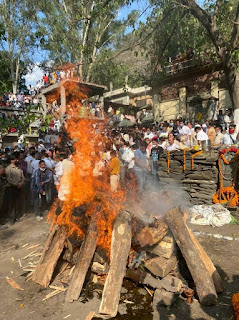 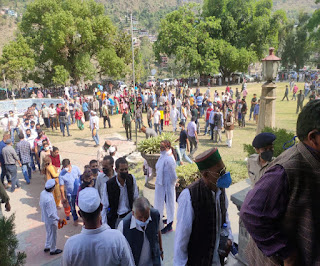 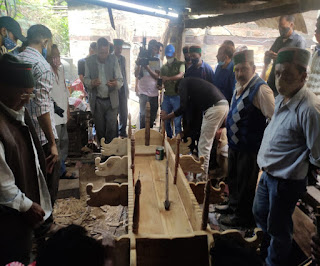 Thousands of his well-wishers gathered at the crematorium to bid adieu to the leader. The 87-year-old veteran Congress leader breathed his last after prolonged illness at Shimla's Indira Gandhi Medical College (IGMC) on Thursday.

The body was kept at Rampur's Padam Palace for 'antim darshan'  from 8 am to 2 pm before the funeral.

Popularly known as 'Raja Saab' as he was born heir into the erstwhile princely state of Bushahr, Virbhadra Singh was in active politics for over 50 years.

In his every elections -- be it the Assembly or the parliamentary -- Virbhadra Singh single-handedly campaigned and conducted 15 to 20 meetings every day. Political observers say his death will a big vacuum for the Congress leadership.He was the nine-time legislator and five-time MP.

In the last assembly elections in 2017, Virbhadra Singh and his son Vikramaditya Singh won in their constituencies, even as their Congress party lost power.Passing away of such a personality has saddened people across India. Many have taken to social media to pay condolences virtually. Senior Congress Leader Sanjay Rattan said that Virbhadra Singh was a stalwart leader, who ensured unprecedented contribution in development of Himachal Pradesh. The country and particularly Himachal has lost a great personality and a dynamic leader.He said that Virbhadra Singh would always be remembered and respected by the people of the country for his simplicity, humanity and benevolence.

Earlier Vikramaditya Singh, his son and political successor whose raj tilak ceremony was performed. The ceremony took place in a small room adjoining the Darbar hall of Padam Palace at around 8 am. The brief ceremony was completely a private affair, away from public and media glare in a closed door. Barring Vikramaditya and his wife, no other member of the immediate family was allowed to enter.