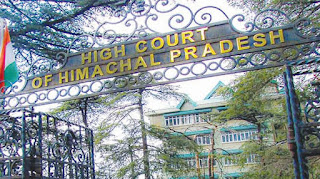 SHIMLA----The High Court of H.P. today issued notice to the Chief Secretary to the Government of H.P., Principal Secretary(PWD) to the Government of H.P., Deputy Commissioner, Shimla and the Executive Engineer, HPPWD, Rohru Division, District Shimla in a petition alleging the inaction of the State Government in maintenance and repair of 70 years old Ganasidhar to Sungri Road, in Rohru, District Shimla, which is stated to be the lifeline of that area.

A Division Bench comprising Acting Chief Justice Ravi Malimath and Justice Jyotsna Rewal Dua passed these orders on a petition filed by one Arpit Sharma of Village Bhamnoli, Tehsil Rohru of District Shimla , which was taken up suo moto by the Court as Public Interest Litigation. The petitioner has alleged that most of the people in his area are involved in horticulture activities and the Ganasidhar to Sungri Road is the lifeline of the horticulturists as this is the only road which connects them to the nearby market to sell their produce. It has been alleged in the petition that the condition of this road, upon which the livelihood, agricultural and tourism activities of the people is dependent, is very pathetic from many years and from time to time the surrounding panchayats have demanded for the maintenance of this route but no heed has been paid to their requests. The petitioner has also alleged that the importance of this road can be evaluated from the fact that first Prime Minister of India Pandit Jawahar Lal Nehru also visited this place and the first and only Home Minister of H.P., Pandit Padam Dev also belonged to this area. The petitioner has prayed that the authorities concerned may be directed to repair and properly maintain the said road.

The Court directed the respondents to file their reply within a period of four weeks and posted the matter after four weeks.