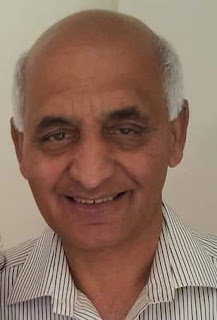 By Braham Dev Sharma
He lived like a king of the masses and he died like a king of the masses. I am saying about Mr. Virbhadra Singh, popularly known and called Raja Virbhadra Singh who passed away yesterday in the wee hours. He remained Chief Minister of Himachal Pradesh in six term and member of the Union Council of Ministers for three time and had devoted 60 years for the service of the people in spite of having born in the princely family.
Having been closely associated with him for more than 8 years. I have personally seen working 20 hours daily may be he was in Shimla or in any other parts of the State even in interior or backward areas He will get up at 4am and dispose all the official files and get ready by 7am to meet the public to redress their grievances.
Hundreds of such people used to meet him daily and he never disappointed them. There used to be tremendous crowd in his public functions and people from the core of their hears used to raise slogans , "Raja nahin fakir heiy – Himachal Ki takdir heiy" . "Raja jab tak suraj aur chand rahege – Raja tera raj rahega." He was very kind hearted person. He could not see anyone in distress. There was always tears in his eyes, whenever he used to listen to the plight of such persons. Diffult to find such an emotional person.
As mentioned earlier he also died as the king of the masses. He left for his heavenly abode at about 3.40 am and this news spread like a fire throughout the State. By 6.00 am almost all walls on social media were full of tributes and condolences to this great leader and people started rushing to the IGMC where he passed away and also his personal residence Holly Lodge, where his immortal remains were being brought from the IGMC.
It was looking that every road is leading towards HollyLodge and within no time there was a beeline of his well wishers for the last darshan of their beloved leader. On second day, the Ridge where his immortal remains was brought to fecilitate the people to have last darshan, was packed to the capacity. People from all walks of life irrespective of political affilations had assembled there to bade a last farewell.
Mr. Jagat Parkash Nadda, National President of the BJP, who had visited the IGMC two days back to enquire the welfare of Mr, virbhadra today qagain rushed from Delhi to Shimla and paid floral tributes to him on the Ridge Maidan. Senor Congress leader and former Congress President ,Rahul Gandh also made a point to come to Shimla to pay his last respect to the departed sould and console the family and he also paied floral tribute in the Rajiv Bhawan, the headquarter of the State Congress Committee.
Himachal Pradesh CM, Mr Jai Ram Thakur and several State Ministers visited the Holly Lodge yesterday to pay their last respect to the departed leader. The State Government had also announced three day State mourn and closing of all government offices for one day yesterday
The President of India, Mr. Ram Nath Kovind also conveyed his condolence to the bereaved family of Mr. Virbhadra Singh. Mrs, Sonia Gandhi, the President of the Indian National Congress, who could not make to visit Shimla also conveyed here heartfelt condolences to the family of Virbhadra Singh. Senior leaders of the Congress and various other political parties also visited in large number, Holly Lodge, The Ridge and Rajiv Bhawan to pay their last respect. People were in tears while balding final farewell to the beloved leader. The way in which people have exhibited their emotions on the death of Virbhadhra Singh shows his stature in the Indian politics in general and State politics in particular. He was a great statesman , a seasoned politician and a good administrator and above all the benefactor of the people and the State.
The funeral of departed leader will take place tomorrow at Rampur his native place and erstwhile princely State.
The role played by Virbhadhra Singh in the development of the State and also improving the socio economic lot of the people is very vital and difficult to describe in this post. Let it be on some other day. Today is the time to pay only tributes, which I pay from the core of my heart along with other thousands of people. OM SHANTI