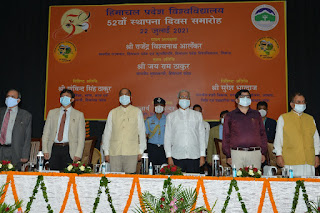 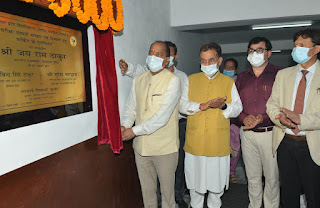 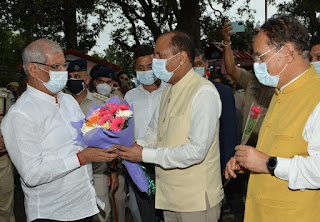 Autonomy of HPU will be maintained for its better functioning: CM

SHIMLA----While Congratulating faculty members and students the HP University on its 52nd Foundation Day today, Governor Rajendra Vishwanath Arlekar said that education was the foundation of life and everyone remains a student throughout his life but it was important to realise the target of our education.

"Both the teacher and the learner must know what they are learning.  How it should be related to our high tradition and what subjects should be taught", he said.

Shri Arlekar said that the future of the country depends on what ideas we were giving to the young generation and was necessary to give them ideas of social and national interest.  He added that the invaders targeted our education system time and again as they wanted to harm promotion of our culture.

He said that the Himachal Pradesh University has a glorious and progressive past and in its long journey of 51 years it has achieved many milestones in academic and research activities.

The Governor said that the students of this university have earned a name in the field of knowledge, science, art and technology at the national and international level. This tradition needs to be strengthened further and we should keep in mind that the benefits of education, along-with our personal development should also benefit the society and the country.

Shri Arlekar said that in order to build a better society, all of us should contribute towards the upliftment with sensitivity towards those who were relatively behind in the journey of development. He said that we have to give creative direction by giving intellectual knowledge to the youth power. It was also our responsibility to develop the courage and ability in the youth to face the contemporary challenges, only then the university would be able to play its role in a real sense. He said that the University should become the centre of research, where the basis of education should be character building. He emphasized on qualitative education as well as raising the grade of the university.

He said that being Governor of Himachal Pradesh, he would try to convey the feelings of the depth of ocean waves to the heights of mountains.

Speaking on the occasion, Chief Minister Jai Ram Thakur said that the University has played a leading role in teaching and learning, education, research and technology. He said that the University has provided professional training for high-level jobs as well as the education necessary for the development of the personality. This University has helped the students in providing the new knowledge and skills needed to meet the challenges of sustainable development in a community, in raising public awareness and providing preconditions for informed decision-making and responsible behaviour.

Jai Ram Thakur said that the most important role the University has been assigned was the production of highly skilled manpower and research output to meet perceived targets. He said that the Central Government has formulated 'National Education Policy-2020' which aims at building overall personality of the students by strengthening infrastructure for open and distance learning, online education and increasing the usage of technology. He expressed hope that the new education policy would go a long way to prepare the students to meet the emerging challenges.

The Chief Minister said that even during the Corona pandemic, State Government had ensured that the pace of development goes uninterrupted. The State Government had planned celebrating 51 events at state level to commemorate the Golden Jubilee year of the Statehood, but it was adversely affected due to the pandemic.

He said that effective steps were being taken to ensure that everyone gets best treatment during the pandemic. He said that no patient in the State was deprived of proper treatment and logistics such as oxygen and medicines. The vaccination campaign launched by the State Government had also been even appreciated by Prime Minister Narendra Modi. He said that the State has also achieved zero percent wastage in vaccination and the tribal districts of the State have achieved cent percent first dosages of vaccination.

Chief Minister said that adequate parking slots would be constructed in the University under the Smart City Project. The State Government would ensure that the autonomy of the University would be ensured for its better functioning. He also suggested the University to organise one special event on the 50 years of its journey and also honour the people who contributed in making of this institution.

Earlier, the Chief Minister dedicated developmental projects worth about Rs. 6.73 crore in the University campus. He unveiled the statue of former Prime Minister Atal Bihari Vajpayee in the campus constructed at a cost of Rs. 20 lakh.

Urban Development Minister Suresh Bhardwaj said the university has a glorious history and many big personalities of the country and administrators have passed from this university including National President of BJP J.P. Nadda, former Union Minister Anand Sharma, former Governor Ashwani Kumar, Chief Justice of Patna High Court Sanjay Karol, present Directors of PGI Chandigarh and AIIMS Delhi and many more have all been the students of this university. He said that he was fortunate that he also studied in this university and was the first law graduate from the university.

While congratulating the University on its foundation day Education Minister Govind Singh Thakur said that there had been a lot of development in these 51 years and today the University has 13 faculties including 9 campus and 47 departments and more than 18 special study centres. He said that in order to preserve the rich cultural heritage of the country, 13 Chairs have been established in the University, in which studies, teaching and research work was being done and these chairs remind us of the ideals of our nation-builders. He said that the Government of India has implemented the National Education Policy in the country after 34 years. He expressed confidence that this education policy would make India a superpower of knowledge.

Registrar Sunil Sharma proposed the vote of thanks.