CM presides over meeting of Saksham Gudiya Board 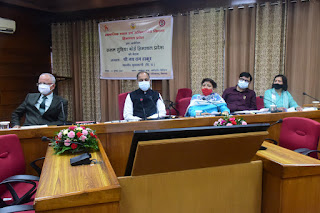 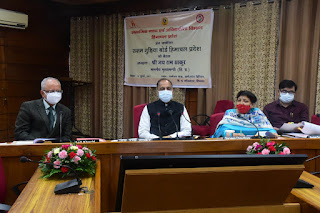 CM presides over meeting of Saksham Gudiya Board

SHIMLA-----
Presiding over a meeting of Saksham Gudiya Board here today, Chief Minister Jai Ram Thakur stressed the need for creating awareness amongst the girls about their rights besides socio-economic empowerment. He said that Government was committed for safe and secure environment for women and girls in the State. He also felt the need for taking strict action against the teachers involved in abuse of the students.

Chief Minister said the Saksham Gudiya Board was constituted in the year 2018 with an objective to ensure empowerment of women and girls, making recommendations on Acts, Rules, Policy and Programmes related to safety and security of the girl child. He said that the Board also aims to review implementation of various programmes being run by departments for upliftment and empowerment of the girl child in the State. He said that Board also envisages to make recommendations for qualitative improvement in health and nutritional aspects of girl child.

Jai Ram Thakur said that the State Government has initiated several schemes to ensure empowerment of women and girl child.  He said that 'Shagun' Scheme has been launched which provides Rs. 31,000 as grant to girls from BPL families at the time of marriage. He said that Government has also launched Swaran Jayanti Naari Sambal Yojna to provide social security cover to eligible elderly women in the age group of 65-69 years. He said that social security pension of Rs. 1000 per month was being provided to over 60,000 elderly women of this age group.

Chief Minister said that as the government came into power Gudiya Helpline was launched to provide immediate assistance to girls at the time of distress. He said that about 6400 complaints were received on this helpline. He said that the main objective of the State Government was to provide a fearless and best environment to the girl child so that they could excel in the desired field.  He said that the Board must also come forward to give its suggestions regarding steps to be taken to ensure safety and security of the women and girls.

Jai Ram Thakur said that the State Government was committed to strengthen the Board. He said that regular meetings of the Board must be held to monitor the schemes initiated for the upliftment of women and girl child.  He said that special awareness campaign must be launched to sensitize the masses about the safety and security of women.

Special Justice and Empowerment Minister Sarveen Chaudhary said that the main objective of this board was to ensure security and safety of the women and girls. She said that it was unfortunate that several cases of sexual harassment were being reported from different parts of the State. She also detailed various welfare schemes launched by the Department for empowerment of the women and girls on the occasion.

Director Women and Child Development Rakhi Kahlon welcomed the Chief Minister and other dignitaries present on the occasion. She also conducted the proceedings of the meeting.