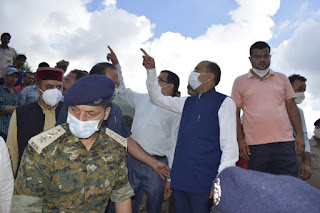 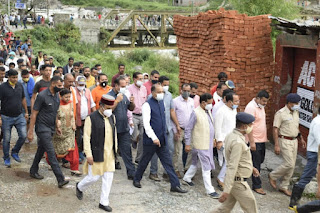 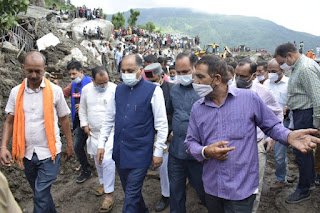 SHIMLA----Chief Minister Jai Ram Thakur today made an aerial survey of the flash flood affected area Boh of Shahpur Assembly constituency of Kangra district. He took stock of the losses suffered due to flash flood on 12 July, 2021 and also met the affected families of the area. He directed the district Kangra administration to take up the relief and rehabilitation work on war-footings in the affected areas.

The Chief Minister said that a team of NDRF was coordinating the district administration in rescue and relief works and all out efforts were being made to trace the missing persons.

He also talked telephonically to DC Sirmaur Ram Gautam and enquired about the efforts being made by the NDRF and district administration to rescue the persons who got stranded on the island in Giri river in Paonta Sahib sub-division of Sirmaur district on Monday.