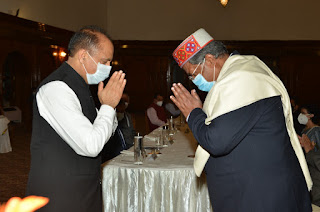 Speaking on the occasion, the Chief Minister said that the one year and nine months tenure of Mr. Justice Swamy as Chief Justice of Himachal Pradesh High Court would go down in the annals of the State as the tenure which witnessed concerted efforts in speedy disposal of cases and ensuring justice to the people at the earliest.

Jai Ram Thakur said that it was on the initiative of Mr. Justice Swamy that three fast track courts were established at Nahan, Shimla and Kinnaur under POCSO Act. It was due to his initiative that judicial buildings were constructed even in remote areas of the State and were equipped with latest technology.

He wished healthy and long life to Mr. Justice L. Narayana Swamy and presented a memento, shawl and Himachali cap to him.

Mr. Justice L. Narayana Swamy thanked the State Government in general and Chief Minister Jai Ram Thakur in particular for hosting High Tea in his honour. He said that he would cherish his tenure as Chief Justice of Himachal Pradesh High Court throughout his life.