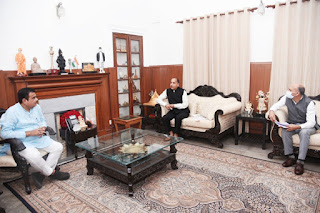 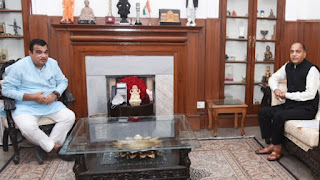 Chief Minister thanked the Union Minister for sanctioning various projects under Central Road and Infrastructure Fund (CRIF) worth Rs.193 crore to the state. He said that roads are the lifelines of the hill state and these roads would go a long way in strengthening the road connectivity in the State.

Jai Ram Thakur also discussed regarding four laning of Shimla-Matour and Mandi-Pathankot National Highways. He also thanked the Union Minister for the overall improvement in the roads under National Highways Authority of India (NHAI) and requested for proper maintenance of existing allignments of National Highways where work has been started by the executing agency.

The Union Minister also reviewed the progress of road projects under NHAI and assured to include road projects from the state in the second phase of Bharat Mala Road Project which would help in boosting religious tourism in the state. He also assured to start work on Kaithlighat-Dhalli-Shimla bypass soon.

Chief Minister also invited Nitin Gadkari to the state. The Union Minister agreed to visit the state soon to not only review the progress of various projects but also for performing foundation stones and inaugurations of new projects.