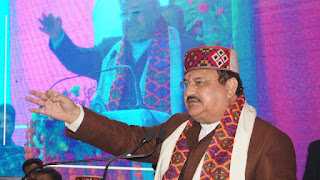 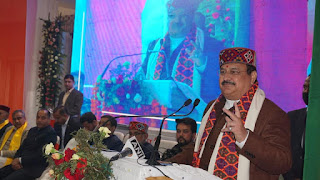 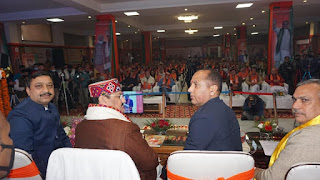 Dharmshala---Each and every party worker of Bhartiya Janta Party must work with dedication and commitment to ensure the motto of State BJP 'From Gram Sabha to Vidhan Sabha' could be achieved in 2022 assembly elections. This was stated by the National BJP President Shri Jagat Prakash Nadda while addressing the meeting of State BJP Executive Committee at Dharamashala in Kangra district today.

Shri Jagat Prakash Nadda said that the BJP was a political party with a difference as a common worker can reach at top position in the BJP whereas on the other hand all remaining the political parties were of a particular family. He said that today BJP has a membership of over 18 crore. He said that the economic mode of BJP was aimed at overall development of the nation and human. He said that all the schemes launched by the BJP led Union Government aim at upliftment of welfare of every section of the society. He said that 'Sabka Saath Sabka Vikas and Sabka Vishwas' was the motto of the BJP.

National BJP President urged all the party workers to ensure self-assessment and self-valuation that what they have done to strengthen the party. He said that the BJP was a cadre based organisation and this was the biggest strength of the party. He said that the Himachal Pradesh has today emerged as a model for other States in making initiatives like holding Panna Pramukh conclaves. He said that now the need was to go ahead to become Panna Committee to strengthen the party at the booth level. He also appreciated the steps taken by the BJP ranks and files to provide relief to the people during the Corona pandemic. He said that at National level about 25 crore 'Modi Food kits' were distributed during the lockdown.

Jagat Prakash Nadda said that construction work has been started in six offices of BJP at the district level. He urged the State BJP President to identify land for construction of offices in other districts of the State. He said that the offices were not only a proper place to work to strengthen the party but also a nursery and training centre of building a strong cadre. He said that the mantra of "Finding Opportunities in Challenges' given by the Prime Minister has ensured that today India was preparing about 5 lakh PPE kits per day in the country. He said that not only this India was today providing vaccine to 16 countries of the world. All this was possible due to the able leadership provided by the Prime Minister Narendra Modi, he added.

Shri Jagat Prakash Nadda urged the party functionaries to take the policies and programmes of the State and Centre Governments to the people living at the lowest ebb. He said that Ujjwala Yojna, Ayushman Bharat, HIMCARE, Grihini Suvidha Yojna, etc. were schemes which have brought smile on the faces of crores of people of the country.

State BJP President Shri Suresh Kashyap said that the people of the State were fortunate that the son of the soil was today heading the world's largest political party. He said that due to the strong political will power of Prime Minister Shri Narendra Modi, today India was fast coming out from the corona pandemic. He said that the State BJP ensured effective and optimum use of social media during the Covid-19 pandemic to strengthen the party. He said that the people of the State have vindicated the policies and programmes of the present State Government headed by the Chief Minister Jai Ram Thakur  by supporting the BJP candidates in the  Lok Sabha elections,  Vidhan Sabha bye elections and elections to the PRIs and Urban Local Bodies.