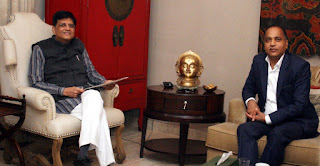 Chief Minister requested the Union Minister for hundred percent centre government funding for the strategically important Bhanupali-Bilaspur-Leh railway line. He said that state has limited funds and requested for complete funding by Centre as the railway line is very important for state as well as country.

Jai Ram Thakur also requested for support from centre for setting up of Bulk Drug Pharma Park in Una district. He said that Himachal Pradesh is already a leader in drug production and is a pharmaceutical hub of the country and added that this project would be another feather in the cap of the state and would generate employment opportunities thereby boosting the industrial sector.