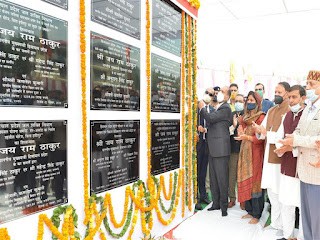 Dedicates about Rs. 60 crore irrigation schemes for the area

Jai Ram Thakur laid foundation stones of strengthening and upgradation of Lagwalti-Bamsan lift drinking water scheme under Jal Jeevan Mission to be completed by spending an amount of Rs 45.41 crore, upgradation and strengthening of Malian-Sadriyana lift water supply scheme to be completed at a cost of Rs. 12.40 crore and Rs 1.87 crore lift water supply scheme Amroh. He also laid foundation stones of Samlah-Dasmal via Tohu road to be completed by spending Rs 3.12 crore, Matlana-Buhana road of Rs 8.34 crore, Tikkar-Khatrian-Dimmi road upto Village Jambehad of Rs 1.83 crore, bridge over Chanth Khad of Rs 2.50 crore and Bus Stand at Bhoranj to be constructed at a cost of Rs 3.20 crore.

Chief Minister said that the opposition leaders were doing politics even during this crisis. He said that they made a hue and cry that the State Government was doing nothing to bring back lakhs of Himachalis stranded in different parts of the country. Now when the Government has brought home about 2.50 lakh people of the State from various parts of the country, the same Congress leaders were alleging that the State Government has threatened the lives of lakhs of Himachalis by bringing back these people, he added.

Jai Ram Thakur said that it was due to the strong and able leadership of Prime Minister Narendra Modi that the dream of crores of Indians has been realized, with Bhumi Pujan of Lord Ram Temple at Ayodhya performed by Prime Minister and magnificent Lord Ram Temple would be constructed within two-three years. He said that not only this, several other historic decisions such as abrogation of Article 370, Triple Talaq etc. had been taken by the Government. He said that the whole world was recognizing India as a 'World Power', but the opposition leaders were finding a fault even in this. He said that today the country was producing over 4.50 lakh PPE kits per day and exporting it to several other countries.

Chief Minister said that it was a matter of pride that Himachal Pradesh had become the first smoke free State of the country as about 2.80 lakh free gas connections have been provided to the needy households. He said that HIMCARE scheme has been launched to provide rupees five lakh health care cover to the families not covered under the Ayushman Bharat Yojna of the Union Government. He said that Rs 3000 per month were being provided to families with chronic ill patients under the Sahara Yojana. He said that Mukhyamantri Swawlamban Yojna has been launched to provide financial assistance to the youth to start their self employment ventures.

Jai Ram Thakur said that Rs 3300 crore Atal Tunnel Rohtang was the biggest gift of Prime Minister Narendra Modi to the people of the country in general and people of the State in particular. He said that it was the vision and dream of former Prime Minister Atal Bihari Vajpayee, which was possible due to the strong will power of the present Prime Minister. He directed the officers to ensure time bound completion of all the projects foundation stones of which were laid by him today.

Earlier at his arrival at Kanjian helipad, Chief Minister was accorded a rousing welcome by the local leaders and people of the area.

Industries and Transport Minister Bikram Singh said the Chief Minister Jai Ram Thakur belongs to a humble background and understands the developmental needs of people of the State. He said the bus stand at Bhoranj would be completed within stipulated time period. He also urged the party workers to make policies and programmes of the Central and State Government reach the people.

Local MLA Kamlesh Kumari while welcoming the Chief Minister said the people of Bhoranj area were fortunate that Chief Minister Jai Ram Thakur has always remained considerate towards developmental needs of people of the area. She said the last visit of Chief Minister to the constituency on 22nd December, 2018 was a historic one, as most of the announcements made by him have been fulfilled.