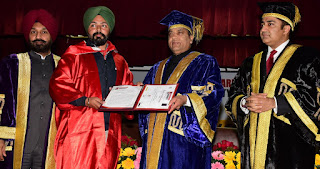 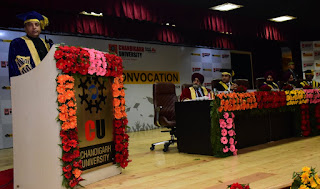 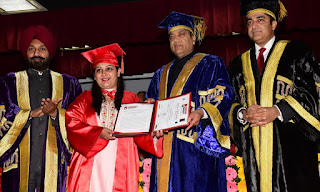 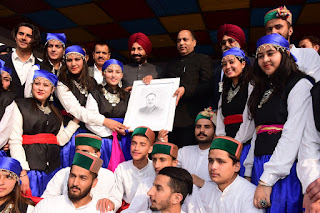 SHIMLA---------    It is education which is synthesizing factor and builds both common ethos and institutions which are of paramount importance for national growth and security, whether political, economic, social or cultural. Chief Minister Jai Ram Thakur said this while addressing the Convocation Function of Chandigarh University at Mohali in Punjab today.

Jai Ram Thakur said that education for nation building should be a synthesis of universal humanism, scientific curiosity and a knowledge of the vast, the supreme, the spiritual, the subtle, through whom everything evolves, gets sustenance and meaning. He said that the desired objectives could be achieved only with a love and passion towards works. He said that over 600 research work patents have been filed by the University which was a commendable effort.

He said that the nation has been making long strides in the areas of infrastructure and economic development as well as in science, technology and education. He said that to sustain this pace, it was quite natural that a robust system of education runs in parallel to provide a highly qualified, talented and committed pool of trained manpower.

Jai Ram Thakur said that the Chandigarh University was also helping the efforts of the Government in laying a foundation for higher education that provides students access to world-class teaching methods and meets the dual challenge of providing employment while focusing on inclusive education. Increased use of technology has the potential to free us from the limitations of time, space, reach and, to some extent, affordability, he added.

Chief Minister said that economic necessities of today have made technical and professional education very important to fully utilize the natural resources of the country. He urged the students not just become soulless machines or ciphers, a units in a technical system which was controlled by no one and effects everyone. To fulfill its function of nation building education must serve economic, democratic as well as spiritual realities, he said.

Jai Ram Thakur said that the country was today secure in the hands of Prime Minister Narendra Modi and there were ample opportunities for the talented youth to grow and progress. He said that tendency to learn was important to forge ahead in life. He said that in the present era of cut throat competition we have in a way left values, which was a matter of concern. He said that it was vital that what ever one achieve in life one should not forget our values, culture and traditions. He said that the education without value was useless and meaningless. He said that once India was known as Vishva Guru and it becomes duty of each one of us to help regain its old glory.

While expressing concern over the menace of drug abuse particularly amongst the youth, Chief Minister said that this social vice was ruining the whole society. He also urged the students to come forward to check this social evil as stringent laws alone were not enough without the participation of the people.

Chancellor of the Chandigarh University Satnam Singh Sandhu presented vote of thanks.

Vice Chancellor of Chandigarh University Prof. R.S.Bawa welcomed the Chief Minister and other dignitaries present on the occasion.

Guest of Honour Paras Kaushik also spoke on the occasion.

Deans, Professors, students and parents were present on the occasion.