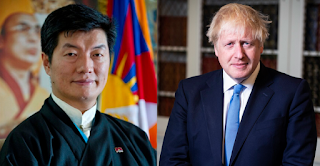 "On behalf of the Central Tibetan Administration and the Tibetan people, I extend my warmest congratulation on your resounding victory in the general election," the President said.

"During the recent United Nations Human Rights Council, UK led 22 other countries in urging China to end its mass arbitrary detentions and related violations against Muslims in the Xinjiang region," he said. "As one of the founding members of the United Nations, the United Kingdom has played and can continue to play a significant role in the maintenance of international peace and security."

"Under your able premiership, we look forward to the UK's continued leadership in protecting universal human rights and freedom around the world."

Recalling the historic meetings of former Britain PMs Gordon Brown and David Cameron and former Deputy PM Nick Cleggand with His Holiness the Dalai Lama, President Sangay said the Tibetan people remain hopeful for this tradition to continue under the leadership of Prime Minister Boris Johnson.