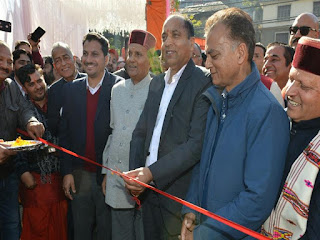 SHIMLA--------While presiding over review meeting on developmental projects being executed in Mandi district today, Chief Minister Jai Ram Thakur directed the officers to complete the developmental projects within the stipulated period so as to avoid cost of escalation of the projects, besides providing facilities to the people in time.

Jai Ram Thakur said that the state government was committed to ensure balanced and uniform development of every part of the State with special emphasis on development of those areas which have remained neglected due to one reason or the other.   He said that top priority should be accorded for construction of roads and bridges in the area.  The efforts would be made to ensure that Mandi town becomes a prominent tourist attraction, for which the historic and heritage aspect of the town would be promoted in a big way.

Jai Ram Thakur said that adequate parking space would be developed in Mandi town to facilitate the local as well as tourists. With a view to decongest Mandi town, efforts would be made to shift police line to Dhangsidar. He said that in order to beautify the town, efforts would also be made to erect entry gates at four entry points. He also directed the officers to explore possibilities to construct bye pass at Mandi to decongest the town. He also suggested the officers to explore possibilities to construct waking path on both the banks of river Beas.

Chief Minister also participated in the Signature Campaign launched by the district police against drug abuse.