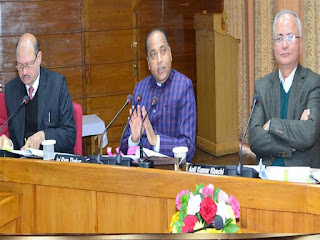 Shimla-----   Chief Minister Jai Ram Thakur while presiding  over the "Him Vikas Smiksha'' meeting held here today directed the officers of the State Government to adopt proactive approach so that the targets fixed by the State Government could be achieved in a stipulated time period. He said that all the departments must come forward with at least one new initiative and ensure its effective implementation. He said that for this the officers require out of the box thinking and initiatives.

Chief Minister said that the aim of reviewing of progress of the ongoing developmental projects was to expedite the pace of work in the State so that fruits of schemes could be delivered to the people well in time. He said that 103 Key Performance Indicators (KPI) have been set for 21 departments of the State besides 4 common KPIs for 26 departments. He said that this is an holistic programme to review the working of the Government departments as a whole instead of individual departmental reviews.

Jai Ram Thakur exhorted the officers to ensure proper implementation of policies and programmes of the State Government so that the impact of these were percolated down to the people  of the State at the earliest.

Jai Ram Thakur said that the Public Works department should adopt proactive approach to implement some innovative projects which becomes bench mark for even other states. He said that special stress would be on expediting the cases of FRA and FCA so that the developmental projects do not suffer due to want of forest clearances. He said that Work Management System should be implemented in the Department at the earliest for its effective functioning. He said that apart from ensuing time bound completion of projects, major stress must be laid on quality construction. He said that there should be no compromise on quality construction and laxity on the part of constructors or officials would be viewed seriously.

Jai Ram Thakur said that the Irrigation and Public Health Department must ensure that the chlorinated water supply particularly in the rural areas to avoid spread of water borne diseases. He said that for this regular monitoring of water being supplied must be ensured. He said that availability of irrigation facilities would go a long way in  not only motivating the farmers to go for cultivation of alternative and cash crops, but also help in doubling the farm income by next two years. He said that stress must be laid on development of Command areas and installation of handpumps in water scarcity area.

Chief Minister said that the Agriculture department should lay stress on post harvesting management and food processing so as to ensure value addition to the produce of the farmers as this would go a long way in increasing the farmers income. He said that natural farming must be encouraged so that the State could become a natural farming state of the country. He said that efforts should also be laid on creating employment and self-employment opportunities in the agriculture sector. He said that emphasis should also be laid on increasing milk production to supplement the income of farmers.

Chief Minister said that as many as 50,000 farmers have been trained for adopting natural farming and about 40000 farmers have actually started natural farming. He said that farmers should also be encouraged for adopting dairy activities to supplement their income. While showing concern over the functioning of MILKFED, he said that it must diversify its activities. He said that cow sanctuaries would be established in all the districts of the State so as to provide shelters to abandoned cattle. Panchayati Raj Institutions should come forward to ensure that all the abandoned cattle were shifted to these sanctuaries, he added.

Jai Ram Thakur said that target of attracting private investment worth Rs. 1000 crore was fixed in the education sector, against which, private investment worth Rs. 1716 crore have been attracted. While showing displeasure in the delay of providing uniforms, bags and laptops to the students, he directed the Education Department to ensure that during the next session, uniforms, bags, books and laptops be provided to the students well in time so that the students  do not face any inconvenience. He said that emphasis should be laid on improving learning outputs particularly in Maths and English, adding that efforts should also be made on campus placements. He said that the increase in learning outcome must be ensured so that the State becomes the first state of the country in field of education.

Chief Minister said that the State was known for its clean and salubrious environment, thus necessary steps be initiated to maintain the same. He said that the buy-back scheme for polythene should be effectively implemented.

Chief Secretary Dr. Shrikant Baldi while welcoming the Chief Minister assured him that all the policies and welfare schemes of the State government will be implemented effectively.