Unity in diversity was the uniqueness of ournation--MohanBhagwat 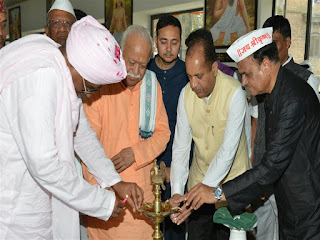 Unity in diversity was the uniqueness of our nation-- Mohan Bhagwat

SOLAN------        Unity in diversity was the uniqueness of our nation which was a plural society and repository of multiplicity of cultures. Sarsanghchalak (Chief) of Rashtriya Swayamsevak Sangh (RSS) Mohan Bhagwat said this while addressing the gathering after he inaugurated the Krishna Temple on the Mall Solan today.

Bhagwat said that Indian civilization, stretching over five thousand years, provides the most distinctive feature in the coexistence of unity in diversity. He said that religion offer a unified vision of reality because God is one and the reality which he created must have unity and integrity. He said that region aims at uniting the humanity and the service of mankind was the service of God. He said that each one of us should work with sincerity and dedication towards the development of our society and the nation. He said that it was the 'Karma' that motivate us towards 'Dharma'.

Sarsanghchalak of Rashtriya Swayamsevak Sangh said that Shri Bhagwat Geeta preaches us to work with dedication for whatever duty has been assigned to us without worrying for the results and fruits of our hard work. He expressed hope that the Shri Krishna Temple constructed in Solan would emerge as a place not only for worship but also a place for pondering for the welfare of the society.

Chief Minister Jai Ram Thakur while welcoming Shri Bhagwat to the State said that India was a  grand synthesis of cultures, religions and language of the people belonging to different castes and communities has upheld its unity and cohesiveness despite several hardships.

Jai Ram Thakur said that religion was the binding force uniting every section of the society. He said that it was important that in the modern era of cut throat competition, we all uphold our religion and culture. Only those societies progress that gives due respect to its tradition and culture, he added.

Chief Minister said that no one can achieve success by abandoning our values and culture. He said that science and religion should coexist for a strong and vibrant Nation. He said that today India was fast forging ahead on the path of becoming Vishav Guru under that dynamic leadership of Prime Minister Shri Narendra Modi. He said that it was under this leadership that the Country has gained its old glory and even the most powerful countries of the world were acknowledging  the power of India.

Jai Ram Thakur said that Himachal Pradesh was known as the Dev Bhoomi throughout the world for its peace loving and God fearing people. He said that the Shri Krishna Temple at Solan would go a long was in quenching    the religious thirst of the people of the area.

Chief Minister assured the members of the Sri Krishna Vrindavan Trust of all possible help from the Government side for expansion of it activities in the State.