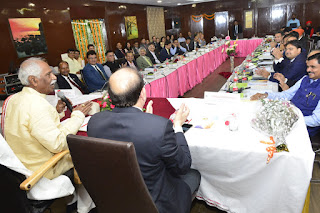 Governor Bandaru Dattatraya said that India has witnessed a number of reforms in the last three-four years and the whole world was now seeing the nation in a very positive way. He added that these reforms were also important in the interest of the country and its citizens but there was a need to implement them, which were being done by the Institute of Chartered Accountants of India (ICAI).

The Governor was speaking on the occasion of Council meeting of ICAI at Chail in Solan district, today.

Bandaru Dattatraya said that ICAI was a statutory body established under the Chartered Accountants Act, 1949 for regulating the profession of Chartered Accountants in India. It is World's second-largest accountancy body with a strong tradition of service to the public interest and to the Indian economy, he added. He said that during its more than 70 years of existence, ICAI has achieved recognition as a premier accounting body not only in the country but also globally, for maintaining highest standards in technical, ethical areas and for sustaining stringent examination and education standards.

The Governor said that the role of ICAI was very important in effective implementation of many government schemes related to the Country's economy. The success of GST would not have happened without the support and active contribution of ICAI and the CA community across the country, he added. He further said that ICAI had organized more than 3000 conferences across the country and made people aware about GST. He said that the Pre Budget suggestion that comes people is helpful in the preparation of a blueprint of the country's economy. He said that in the Swachh Bharat Abhiyan, only ICAI has been made the only partner in the Institutional category.

"The success of ICAI as a body of professionals is a matter of pride for our country. I am sure that CAs will understand the deep responsibility they have for nation-building", said Shri Dattatraya.

President, ICAI Praflla Premsukh Chhajed welcomed and honoured the Governor and briefed about the activities of the Institute.

Vice-President of ICAI Atul Kumar Gupta, proposed a vote of thanks.