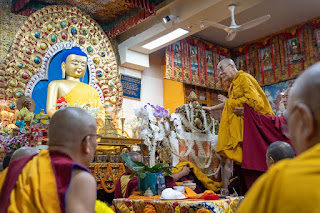 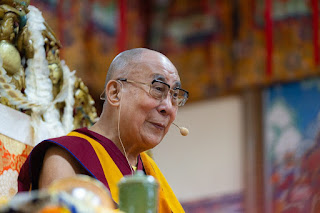 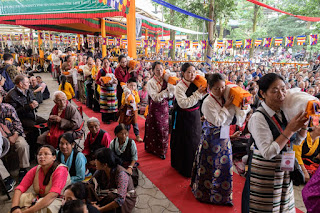 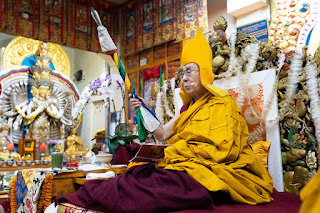 Dalai Lama began by thanking and greeting all the organisers and people who have especially come to offer the Long Life Prayer from far.

Dalai Lama in his words of encouragement said " At this very difficult time, we have truth on our side so Tibetans living inside and outside Tibet, since we have the unbounded spirit of Tibetan, therefore, our Religion and Culture is alive so far"

Dalai Lama   noted that those who are offering long-life prayer are essentially representatives of aspiration and hope of Tibetans around the globe.

Dalai Lama applauded the togetherness and unity of the Tibetans and depicted the prevalence of unity in ancient Tibet when Tibetans were united and all the three provinces lived as one.

Addressing the five groups offering tenshug,  Dalai Lama   said, "today, here you are sincerely and with a pure heart making this long-life offering, This represents the eminent solidarity and unity of the Tibetan people".

Dalai Lama further mentioned that the story of Tibetan refugees is unlike any other counterparts, is a specimen that anyone can stand the test of time as long as hope and unity prevail.

Dalai Lama further elucidated that the Tibetans in exile have dedicated so much for the cause of Tibet due to which many people around the world now know the story of Tibet and Tibetan people.

Praising the seventeen pandits of Nalanda tradition for their logical way of teaching Buddhism,    Dalai Lama   , in particular, expressed his gratitude to Master Shanta Rakshita for his advice to translate the holy texts into Tibetan language and not any other languages, because of which  Dalai Lama    noted Tibetan scriptures came into being.

Dalai Lama then related Buddhism in today's world while stressing about Quantum Physics which he said was already discovered 2500 years ago in the Buddhist tradition.

Speaking further,    Dalai Lama urged the monastic institutes to cultivate the study of modern science and thereby have a discussion with experts and researchers. He also remarked that the modern scientist on the other can benefit a lot from Buddhist tradition as well since much of Buddha's teaching is profound and established through reasoning and logic.

Dalai Lama further asserted that the Tibetan Language is the best for those wishing to study Buddhist Philosophy and Psychology.

Dalai Lama said that there are many scholars from all the traditions of Buddhism and urged to continue working hard so that the tradition can survive for many more centuries. On that note, His Holiness lauded Namdroling an extensive Nyingma Monastery and the head of the monastery Late Penor Rinpoche for serving the Buddha Dharma very well.

Thanking the organisers for the profound and extensive tenshug,   Dalai Lama assured his good health which innately brought a surge of joy on the faces of thousands of devotees.