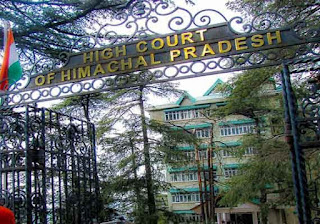 Shimla------The High Court of H.P. today directed the respondent State to file reply within three weeks in the matter related to engagement of teachers under SMC Policy. The Court directed that in the reply, respondent State shall indicate the number of the teachers appointed/engaged under SMC policy in different categories and who are still working as such. The Court also directed that the vacancies in each category of teachers in the State and the steps taken to fill up the same strictly in accordance with the Recruitment and Promotion Rules, be also indicated/specified in the reply.

The Division Bench comprising Justice Dharam Chand Chaudhary, Judge and Justice Jyotsna Rewal Dua, Judge passed these orders on a writ petition filed on the issue of the appointment of teachers being made under SMC policy, against the orders of the Supreme Court of India passed in SLP No.1426 of 2015, which specify that any appointment in the State of H.P. will be made by the competitive method and by procedure. The petitioners have alleged in the petition that this policy is against the very spirit and objective of the Right of Children to Free and Compulsory Education Act, 2009 and Rules and by making appointments under this policy, the standard of education in the entire State has been deteriorated.

During the course of hearing, the Court observed that resorting to the engagement of the teachers in the School under SMC Policy, is in violation of the orders of the Hon'ble Apex Court. However, in the interim, the Court refrained itself from passing any order at this stage, on the assurance of the Deputy Advocate General that till further orders passed in the matter, no appointment/engagement of the teachers under the SMC Policy will be made.

The Court listed the matter for 5th September, 2019.