A full Court reference held in the High Court to mourn the sad demise of Justice T.U. Mehta 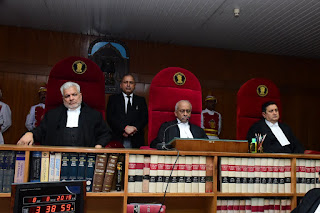 Speaking on the occasion, the Chief Justice V.Ramasubramanian said that Justice T.U.Mehta was an eminent jurist and his lifespan symbolized significant achievements at each stage of his life and career, bringing honour and glory not only to himself but also to the Institutions, which he served. The Chief Justice further added that Justice T.U. Mehta had profound knowledge of all branches of law, but, even while practicing as a Senior Advocate in the Supreme Court, after retirement, he did not exploit his knowledge and talent for minting money. Justice Ramasubramanian expressed his deep condolence to the bereaved family and said that passing away of Justice Mehta is not only a loss to the bereaved family but also to the entire legal fraternity.

Born on 12.12.1917 at Wankaner, a small township in Saurashtra, Justice T.U. Mehta, studied initially at Wankaner High School, graduated from St. Xavier's College, Bombay and thereafter graduated in law securing a University rank in the subject of Jurisprudence and wining "Dara Shetna Jurisprudence" prize. He started his legal practice at Rajkot in the year 1942 and after the end of British Suzerainty and the establishment of the High Court in Saurashtra, he was firmly established as a leading Constitutional lawyer in Saurashtra. He was appointed as District and Sessions Judge, Saurashtra in May, 1954 and continued on the same post in Bilingual State of Bombay and then in the State of Gujarat upto September, 1963. Thereafter, he was promoted as a Judge, City Civil and Sessions Court, Ahmedabad, Gujarat upto 26th December, 1968. On 26.12.1968, he joined Income Tax Appellate Tribunal as Judicial Member on deputation from the State of Gujarat and continued as such upto 12.11.1969. He was appointed as an Additional Judge of High Court of Gujarat with effect from 12.11.1969 and appointed permanent Judge from 7.3.1974. He was transferred as a Judge to the High Court of Himachal Pradesh and took over as such on 7.7.1976. He was elevated as the Chief Justice of H.P. High Court on 20.2.1978 and retired on 11.12.1979.

After retirement, Justice Mehta resumed his legal practice as a Senior Advocate of the Supreme Court of India at New Dehli and completely retired from all types of professional work in the year 1995. Justice Mehta authored about two dozen books in English and Gujarati on religion, history and politics.

The Registrar General Sh. Virender Singh conducted the proceedings. The Registrars of the High Court and a large number of Advocates and staff members were also present.