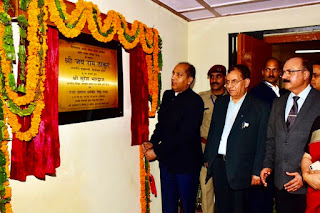 Commission gets facility to conduct online and offline examinations

Speaking on the occasion, the Chief Minister said that the Public Service Commission is playing a vital role in progress of the society by selecting the best brains to serve the State in various capacities such as doctors, engineers, teachers and other officers and officials. In the present era of information technology, it becomes vital that the technology is used at the fullest to ensure promptness, transparency, accountability and minimising any scope of error. He said that effective use of IT not only help in saving time in cumbersome procedures, but also in instilling the faith of the candidates in the Commission.

Jai Ram Thakur said that the state government is committed to strengthen and modernise the Commission and would provide all possible help for its effective functioning. The full use of IT would also facilitate the candidates as they would not have to travel all the way to Shimla to submit their documents and would also get admit cards online.

The Chief Minister said that the state government would also sympathetically consider setting up of a facilitation centre at Dharamshala for convenience of the candidates.

Education Minister Suresh Bhardwaj said that it is heartening that State Public Service Commission is emerging as one of the best recruitment institutions of the country. He said that the massive mandate given to the present government also entrusts greater responsibility on the State leadership and the state government led by the young and dynamic leadership of Chief Minister is committed to provide responsive, accountable and transparent administration to the people of the State.