HP should be compensated for being deprived of harnessing forest wealth: CM 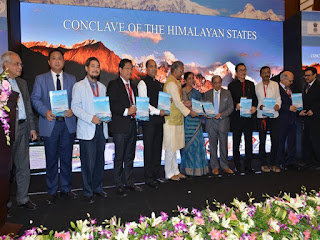 HP should be compensated for being deprived of harnessing forest wealth: CM

Chief Minister Jai Ram Thakur while addressing the conclave of the Himalayan States at Mussoorie in Uttarakhand on Sunday advocated for formulating a holistic, inclusive and consistent development policy for sustainable development of Himalayan states so that despite all bottleneck because of tough topographical conditions, these states could progress at par with other states of the country.

Jai Ram Thakur said that about 66 per cent geographical area of Himachal Pradesh is covered by forests and if ecologically viable and scientific silviculture practices are allowed, the state can earn additional annual revenue of about Rs 4000 crore. However, due to national laws and orders of courts, the state is not neither able to get full revenue from its forest wealth, nor undertaking developmental activities on larger geographical area. Therefore, Himachal Pradesh should be suitably compensated for being deprived of revenue worth crores of rupees for being denied harnessing its forest wealth.

He urged the Finance Commission and the union government to provide adequate grant to revenue deficit states so that after overcoming post devolution deficit, they have adequate funds for capital investment. He said that Himachal has witnessed huge fall in income from GST and urged the Finance Commission for proper evacuation of GST for remaining 33 months for the state.

Jai Ram Thakur said that the state has immense tourism potential but due to non-availability of rail and air connectivity, a big airport must be constructed.  He said that construction of roads in Himalayan states was very expensive and rail network was almost negligible. Besides, being hilly, the Himalayan states are prone to several natural calamities and it is the need of the hour that the Union government ensures adequate allocation of funds under SDRF for the Himalayan states. He added that Article 275 and 280 of Indian Constitution makes provision of adequate grant of economically weak and revenue deficit states.

Jai Ram Thakur said that most of the rivers in the country originate from the Himalayas and the Himalayan states are playing the most significant role in Prime Minister Narendra Modi's water conservation initiative.

He said that since most of the Himalayan states have to depend on financial management on Centre and Finance and Planning Commissions, but after scraping of Planning Commission, these states are facing a lot of financial hardships. He said that the Himachal government is endeavouring to achieve the sustainable development goals by 2022, instead of 2030 and also to enhance the "ease of living" level of its people. He said that the Jan Manch programme of the State has proved a boon to the people of the state for prompt redressal of their grievances nearer to their homes.

The Chief Minister said that due to difficult topography and geographic conditions, the Himalayan states require more finances and manpower for construction and maintain of basics infrastructure such as roads, education, health, irrigation and drinking water, power etc. He said that these states also require more health, education and other institutions.

Jai Ram Thakur expressed hope that this conclave would go a long way in getting more funds from Union Government, Finance Commission and NITI Ayog to the Himalayan States.

Speaking on the occasion, Union Finance Minister Nirmala Sitharaman said that the Himalayan States have a major role to play being the custodian for saving the pristine environment of the Himalayas. She said that long term strategies need to be prepared to protect the fragile Himalayan ecology. The proper infrastructure must be created in border areas of these states to check migration of people from these areas which makes the border areas vulnerable.

The Union Minister said that the proper balance between development of Himalayan States and other states of the country must be maintained. She said that Himalayan States must also ensure that their lands are not exposed to excessive use of chemical fertilisers. Youth should be empowered for ensuring development at the grassroots, particularly in the Himalayan regions as they can come up with new ideas for development, she said.

Vice Chairman NITI Ayog Dr Rajiv Kumar said that the Himalayan region has immense potential having about 18 per cent of the total geographical area of the country.

Meghalaya Chief Minister Conrad Kongkal Sangma said that the Himalayan states should be adequately compensated for helping in maintaining the ecology of Himalayas at the cost of revenue loss of their states.

Chief Minister Nagaland Neiphiu Rio expressed hope that the Finance Commission would sympathetically consider the demands of the Himalayan States for ensuring their sustainable development.

Deputy Chief Minister of Arunachal Pradesh Chowna Mein urged the Finance Commission to present the issues of the Himalayan State before Union government in a befitting manner.

Law and Environment Minister of Mizoram T.J Lalnuntluanga urged to provide adequate funds for strengthening border roads in his state.

Member, National Disaster Management Authority Kamal Kishore threw light on cause of disasters in Himalayan region and steps to mitigate the same.

Advisor to the Governor Jammu and Kashmir K.K.Sharma and    representative of Manipur also shared their views.

A memorandum was unveiled on the occasion by the Chief Ministers of Himalayan states and was presented to the Union Finance Minister, Chairman 15th Finance Commission and Vice Chairman NITI Ayog.

The Chief Ministers and representatives of ten Himalayan states, except Assam participated  in this Conclave.